Trumpeter Bria Skonberg lives “Hot Jazz,” a euphemism for jazz created and inspired by the late, great Louis Armstrong. Along with having an annual “Hot Jazz” festival right in her childhood backyard and appearing on Wycliffe Gordon’s Armstrong tribute Hello, Pops, the native of Chilliwack, British Columbia (“The jazz metropolis of Canada,” she informed us) is a volunteer at the Louis Armstrong Museum in Corona, Queens. I didn’t see her when I visited the museum last year, but if I had, I’m pretty sure I’d have gotten chapter and verse on Satch’s most colorful life. For Skonberg, making that music live and breathe his her mission. Louis invented it, and then he perfected it, so that settles it, right?

Now, for most of the near-full house at A Place For Jazz, a player like Skonberg is a breath of fresh air – as is her skin-tight backup band, all of whom are down with the “WWLD” (What Would Louis Do) program, right down to reedman Evan Arntzen’s slicked-up hairdo and skinny bowtie. What this group did over two bright, lively sets is right in this concert series’ wheelhouse, and choosing Skonberg to close the 2014 season was a stroke of genius on the part of APFJ’s brain trust. Mind you, for those of us who prefers this music’s future over its past, this was a glimpse of what it might be like if Jazz At Lincoln Center had a summer camp in the Catskills where teenagers re-created the genre’s “good old days.” Not good, right? Well… yes and no.

The camp metaphor got established early with Skonberg’s bouncing opening number “Get Happy,” Harold Arlen’s legendary contribution to the Gene Kelly-Judy Garland chestnut “Summer Stock.” The quintet was swinging right from the downbeat, and Skonberg was truly bringing it, showing off big-time chops that pushed me back into my pew. While I found I preferred Arntzen on clarinet, he gave “Happy” a pretty good change-up with his weathered-looking tenor sax. Darrin Ridenhour’s piano solo stayed safely in the middle, as did breaks by bassist Sean Cronin and drummer Darrian Douglas, but when Skonberg and Arntzen brought it back to the head and nailed the finish, all was quite fine in Schenectady’s Whisperdome. “Annnnnd we’re off,” Skonberg told the cheering crowd, smiling broadly.

Just to be clear, this show wasn’t only about sweatin’ to the TRULY oldies. Sure, Skonberg pulled nuggets like Fats Waller’s “I’m Blue, Turning Grey, Over You” and Cole Porter’s “It’s Alright With Me” out of the wayback machine, but she has her own set of well-played, well-crafted originals… all of which sound like they came out of a forgotten songbook someone found under Armstrong’s bed. This doesn’t mean they were bad tunes – far from it. Her coming-of-age (in every way) piece “Let’s Go All In” nailed that moment when the hormones are at peak carbonation, while the non-specific spiritual “My Friend” had the feel of something Mahalia Jackson would have made into a classic. But that’s the thing: All of her original material was completely locked into a time that is long gone, and while that time is certainly better than the vapid pop life this world’s living in now, it doesn’t contribute a whole lot to jazz’ necessary evolution.

All that said, Skonberg really shined for me in two places. First, there were the little inventions she did bring to the established parts of the program: She paired the Great American Songbook classic “Three Little Words” with the instantly recognizable horn break from Stevie Wonder’s “Sir Duke.” Although Skonberg’s medley of Jelly Roll Morton’s “Whinin’ Boy Blues” and Duke Ellington’s “Caravan” were in lock-step with the original recordings, Skonberg played her parts through a wah-wah effects box to show what it might be like if Duke and Jelly were around today. She even sang the lyric for “Whinin’ Boy” through her trumpet, earning both laughter and applause from a crowd that was loving her more and more with each passing second. She closed the night with a righteous gospel take on Janis Joplin’s “Mercedes Benz,” explaining beforehand that she lives in New York City now, so “I don’t have a car, I don’t have a TV… and I don’t have any money!”

Before the show, Skonberg was described to me thusly: “High school cheerleader brings Dixieland jazz into the 21st century.” I wouldn’t go as far as “cheerleader,” although for a moment or two I was flashing back to the assembly concert Up With People did at my high school. (Yeah, I’m THAT old!) Personality goes a long way, and Skonberg has miles of it, making jokes work that would have sounded corny as hell from anyone else’s mouth. She truly loves this music, and she loves her band, who re-pay that love tenfold. But it was when she brought out some of the Central Park Middle School Jazz Band during her second set that she shined a second time. Skonberg broke out an easy-tempo take on “When the Saints Go Marching In,” and then stood back and let pretty much every kid have a solo break, urging them on like the coolest bandleader these kids would ever know. After the show, I saw one of the Central Park players clutching a copy of Skonberg’s latest CD Into Your Own like he’d just beaten Charlie Bucket to Willie Wonka’s last Golden Ticket.

As anyone who’s had more than a few drinks with me knows, it’s my belief that Job One for jazz is to give its present as least as much love as it gives its past, because that’s the only way we’ll convince young musicians that they’ve got skin in this game, too. Then again, those youngsters have to discover the genre before they can adopt it, and the Bria Skonberg Quintet made a lot of young fans on this night, as well as putting a cap on another solid season for A Place For Jazz. 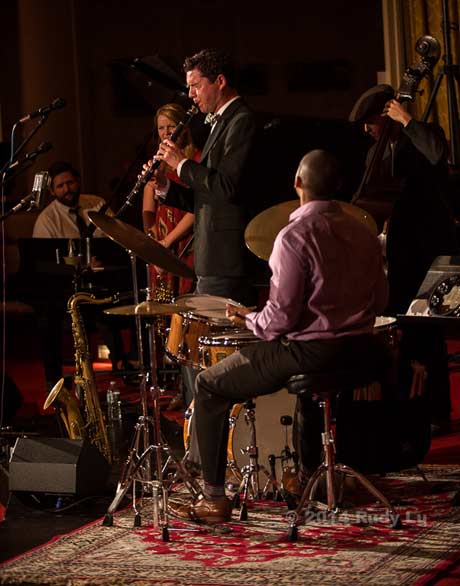