FOR SALE: Nipper… Yes, the Big One! 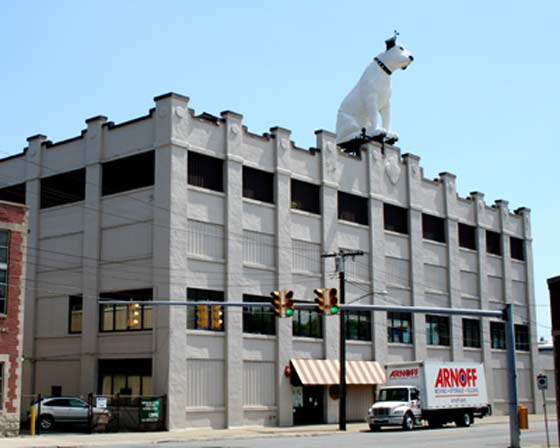 Nipper – the four-ton, 28-foot-tall canine icon who has been the faithful guardian of the Albany skyline for 60 years now – is up for sale… along with the building atop which he (or she) stands.

Nipper and the four-story building at 991 Broadway, as well as several adjacent properties are all owned by Arnoff Moving and Storage, which is looking to sell and relocate to a larger facility.

Well, that’s a wee bit out of our price range, even for a giant multi-national comglomerate like Nippertown.com. But then one word flashed into our heads…

So… what if we started a fan-funded campaign to buy the Nipper and relocate the Nippertown.com headquarters to the newly cool warehouse district of Albany? It’s a big building, and Nippertown.com won’t fill it all, so we’ll invite all of our pals – All Over Albany, Keep Albany Boring, Metroland, Dark Wood Design, to move it on over (as George Thorogood would say) and transform part of the building into an alt-media hub.