I had planned to write a lot more about new jazz this year, particularly in the last couple of months. Then I found out all it took to move a radio show from one station to another – and that’s BEFORE I had to learn how to drive the tractor-trailer! Well, anyway, I’ll try and do better next year, particularly since this year’s crop gave me over 100 CDs to consider for this list, and the stack’s already growing for 2015!

With that in mind, we’re splitting the column in two again, with the performance awards first: 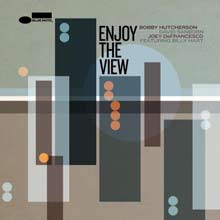 LIFETIME ACHIEVEMENT AWARD:
BOBBY HUTCHERSON – Enjoy the View (Blue Note)
Despite long-term health issues, vibes legend Bobby Hutcherson still gets around, making the occasional appearance in concert and – in this case – in his first studio recording as a leader for Blue Note since 1977. And even though Enjoy the View is more of an ensemble date than a star turn, Hutcherson’s elegance (and eloquence) is knockout beautiful on a date that has more than a whiff of Blue Note recordings from back in the day. Whether it’s on altoist David Sanborn’s grooving “Delia,” B3 master Joey DeFrancesco’s bluesy waltz “You” or Hutch’s own roaring flag-waver “Hey Harold,” Hutch brings home the goods every time. Enjoy gives us a sweet time trip, as well as one more tantalizing glimpse of one of the greats. But unlike most looks we get of legends nowadays, this music is happening now. 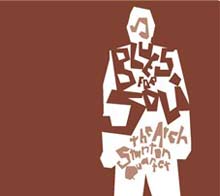 LOCAL HERO AWARD (CD Division):
ARCH STANTON QUARTET – Blues for Soli (WEPA)
After creating a sound on their 2012 debut Along for the Ride that nobody else in Greater Nippertown had made, the next goal for the Arch Stanton Quartet was to conjure up another set of kickass originals while avoiding Sophomore Slump. As some guy who likes to paint his feet in the bathtub nowadays might have said: Mission Accomplished. The second half of Blues for Soli says the Stanton Quartet could have made this happen without their whirlwind tour of Egypt in 2013. That said, the tone that’s set by the four monster tunes contained in the opening “Lady Egypt Suite” is about as blood-and-guts tough as you’re going to get. It’s still “garage-band jazz,” in that the ASQ is a no-frills outfit with a license to kill; however, there are layers of richness to this music that were only hinted at on Ride. What the future brings for the ASQ is anyone’s guess, but as far as I’m concerned, the guy in the bathtub said it all: “Bring it on!”

BEST SOLO OR DUO RELEASE:
NELS CLINE & JULIAN LAGE – Room (Mack Avenue)
This is not a pairing that makes you say, “Oh, yeah! I could see that!’ We’re talking different sounds, different bands, and different generations. And yet, guitarists Nels Cline and Julian Lage bridge all those differences, and then cross that bridge together to give an absolute clinic on harmony and communication. Cline may be best known for the wild hejiras he takes with rock juggernaut Wilco, but that wildness is only hinted at in a chord here or an atonal line there. Lage’s electric-cum acoustic sound gives the entire date a marvelous foundation, but that doesn’t mean he’s only there to hold Cline’s coat; the sublime subtlety Lage has brought to the New Gary Burton Quartet, to Eric Harland Voyager, and to his own recordings is on full display. Cline & Lage aren’t of one mind on Room – it’s actually two minds dedicated to making something both beautiful and unique that holds aspects of both players. 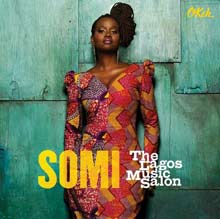 BEST VOCALS:
SOMI – The Lagos Music Salon (OKeh)
Some years are richer than others when it comes to vocal discs, and 2014 was Powerball rich, with outstanding recordings by Catherine Russell, Kavita Shah, Lauren Kinhan and Elizabeth Shepherd. At the end of the day, it was this sensational mix of jazz and world music that won my heart. Rooted in diary entries Somi wrote during an extended stay in Nigeria, The Lagos Music Salon soars like a colorful bird from the first moments of “Love Juju #1.” While cameos by Angelique Kidjo (on a towering reboot of Fela Kuti’s “Love Revisited”) and Common (on the multi-faceted “When Rivers Cry”) are certainly noteworthy, it’s the intricate tapestries Somi weaves on originals like “Ginger Me Slowly” and “Brown Round Things” and on an Africa-centric take on Nina Simone’s “Four American Women” that sets Lagos above all the rest. 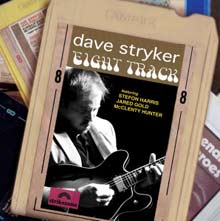 BEST PARTY DISC:
DAVE STRYKER – Eight Track (Strikezone)
Given that 2014 saw jumping releases from the Rebirth Brass Band and the Pedrito Martinez Group, this choice comes as a surprise even to me. The thing is, though, as I lived with this outstanding re-imagining of ’70s pop hits, I not only fell in love with guitarist Dave Stryker’s overall concept, but also with the glowing energy and vibrant grooves Stryker created with vibes monster Stefon Harris, keyboardist Jared Gold and drummer McClenty Hunter. The original recordings of Glen Campbell’s “Wichita Lineman” and David Gates’ “Make It With You” may be cheesy as a slab of limburger on a sunny day, but the loving re-takes Stryker and Co. give them leaves all that behind. Eight Track is like hanging out with old friends and having nothing but a good time, and isn’t that what a party should be about?

ROOKIE OF THE YEAR:
ANDREW HADRO – For Us, The Living (Tone Rogue Records)
It’s kind of weird to call a player who’s got multiple recordings as a sideman (with Chico Hamilton, Tony Malaby and Junior Mance), as well as one disc as a member of the unbelievably well-named outfit Squigglestones. Nevertheless For Us, the Living is baritone saxman Andrew Hadro’s first disc under his own name, so we’re giving him the benefit of the doubt. It’s only fair, since Living gives us the benefit of hearing original compositions that are full, rich, thoughtful and beautifully performed. And how’s this for inspirational source material: The disc title comes from Abraham Lincoln’s “Gettysburg Address”, with the idea that it’s up to the jazz musicians of today to honor the genre’s past by taking this music into the future. It’s a sentiment I wholeheartedly agree with, and to hear it put into dynamic action by Hadro, drummer Matt Wilson, bassist Daniel Foose and pianist Carmen Staaf was one of the true pleasures of 2014.

Top Film “The Imitation Game” vs. “Breaking the Code,” the Best Play, Are About Alan Turing [Berkshire on Stage]