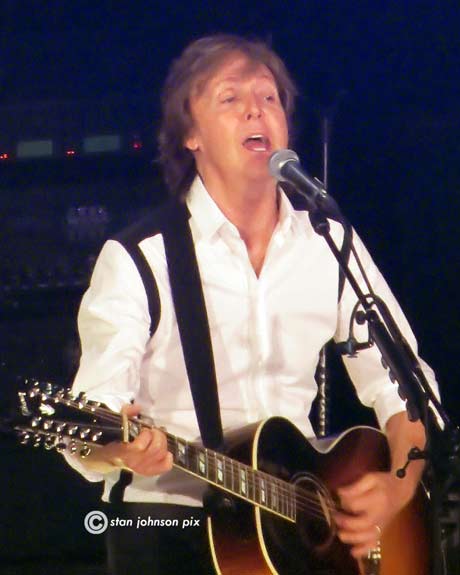 My favorite albums and shows of 2014, in no particular order…

Paul McCartney @ the Times Union Center, Albany
Chicks screaming for three hours while he played the greatest pop songs ever written with a killer band. You can’t beat that!

Ian McLagan @ The Linda, Albany
The legendary keyboard player with a surprisingly soulful voice charms the crowd with music and stories. Mac laughed after the show when I told him Rod Stewart stole everything from him.

Bryan Thomas @ the Steamer No. 10 Theatre, Albany
I don’t think this cat has any idea just how good he is. Yeah, he’s that good.

Blotto @ the Low Beat, Albany
Lee Harvey recovers from shoulder surgery, sits behind a groovy Gretsch kit and hits ‘em like a champion. Add in a joke about a tavern and a flatulent elephant and you got yourself a Blotto show.

The Last Conspirators @ the Low Beat, Albany
Punk Rock, baby! Nobody has more passion or jumps higher than Tim Livingston. You’d jump too if you had Al Kash pounding drums behind you. That cat is a monster.

GONE BUT NOT FORGOTTEN: Rock ‘n’ Roll took a major hit with the loss of Bobby Keys and Ian McLagan. Pour yourself a scotch, put on Sticky Fingers by the Rolling Stones, and listen to Bobby wail.

Tom Petty & the Heartbreakers’ Hypnotic Eye
This album is a songwriting clinic. The Heartbreakers play beautifully, and Mike Campbell has got to be among the most tasteful guitarists to ever plug in.

Robert Plant’s lullaby and… The Ceaseless Roar
I fully support him turning down a Led Zeppelin reunion tour. What’s the point of splitting $800 million three ways when you have a band this good?

Phantogram’s Voices
Electronic? Psych Pop? Trip Hop? Whatever it is, nobody does it better.

Jack White’s Lazaretto
This is how to make a cool record.

U2’s Songs of Innocence
All the little whiney cry babies who complained about this album appearing on their iPhones taking up the precious space reserved for their selfies can go scratch. I love my free U2 album.

A Few Minutes with… Under The Den

A Few Minutes with… Under The Den