Nippertown contributing photographer Albert Brooks weighs in with his Top 11 albums (plus a few honorable mentions) of the past 12 months: 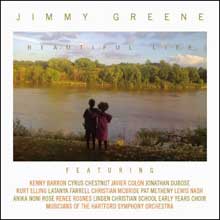 1. JIMMY GREENE: A Beautiful Life (Mack Avenue Records)
This album is a special gift that Greene is graciously sharing with the world. It is an album of simply beautiful music that honors the beautiful life that was his daughter, Ana Grace. The album has a stellar line-up of world-class musicians offering their musical support to Greene in this moving tribute: Renee Rosnes, Christian McBride, Lewis Nash, Pat Metheny, Kenny Barron and others. This is a must-have album!

2. ANTHONY BRANKER & WORD PLAY: The Forward (Towards Equality) Suite (Origin Records)
This is one of the more thought-provoking albums I heard this year. With The Forward, Branker has composed a suite of music inspired by personal reflections on what America means to him as a first-generation American. One highlight among many here is the powerful recitation of Claude McKay’s poem “If We Must Die.” The impressive line-up here includes saxophonists David Binney and Ralph Bowen, trombonist Conrad Herwig, pianist Jim Ridl, bassist Kenny Davis, drummer Donald Edwards, conguero Renato Thoms and vocalist Alison Crockett, as well as 16 fifth grade students from Martin Luther King, Jr. Elementary in Piscataway, NJ providing spoken word contributions.

3. AZAR LAWRENCE: The Seeker (Sunnyside Records)
The Seeker is a powerful album recorded live at the Jazz Standard in New York. Lawrence is a ferocious and lyrical saxophonist who may come out of the Coltrane lineage, but is his own man both as a composer and improviser. This album features a powerful line-up – Nicholas Payton on trumpet, Jeff “Tain” Watts on drums, Essiet Okon Essiet on bass and the fine young pianist Benito Gonzalez – and all the excitement of a live performance.

4. THE COOKERS: Time and Time Again (Motema Music)
This is one of my favorite groups! It features trumpet player David Weiss, who also serves as musical director, trumpeter Eddie Henderson, tenor saxophonist Billy Harper and alto saxophonist Donald Harrison (replacing Craig Handy), pianist George Cables, bassist Cecil McBee and drummer Billy Hart. Here is what AllAboutJazz had to say about the Cookers and Time and Time Again: “Working as a true collective, no one player dominates the session, although Harper’s commanding tone and assured phrasing lifts the bandstand when he takes center stage, with quicksilver cadences underscored by the nimble rhythm section, whose fluid interplay is a marvel of triadic interaction.” 6. DARIUS JONES/MATTHEW SHIPP: Cosmic Lieder: The Darkseid Recital (Aum Fidelity)
Cosmic Lieder, while not necessarily for the faint of heart, is one of the most virtuosic albums out there. Jones and Shipp are only two, but they sound orchestral in their (yes) “cosmic” collaboration and their full use of the entire sonic palette offered by their instruments and talents. This music is overwhelmingly powerful, beautiful, lyrical, rich and satisfying. 8. ORRIN EVANS: Liberation Blues (Smoke Session 2014)
Liberation Blues is a muscular musical statement by pianist, Orrin Evans. In part homage to his departed friend, jazz bassist, Dwayne Burno, Liberation Blues showcases some of the strongest ensemble playing among this year’s crop of new albums; and, with ensemble mates such as JD Allen and Sean Jones (not to mention Bill Stewart and Luques Curtis), some of the “cooking-est” individual displays as well. The two Burno compositions – “Devil Eyes” and “Juanita” – are highlights, but there is not a single misstep here. A really, really fine album that really proves why Evans is one of the greatest keyboardists, composers and conceptualists out there.

9. RODNEY WHITAKER: When We Find Ourselves Alone (Mack Avenue Records)
Rodney Whitaker, the ultimate supporting cast member as a bass virtuoso, steps out front with this release that features a stellar cast, including his daughter Rockelle Fortin, who offers up some very tasty vocals. While this is clearly Rodney Whitaker’s album, Bruce Barth, Gregory Hutchinson and Antonio Hart all bring their creative talents to the mix, adding fuel to a tantalizing batch of originals and standards that showcase the leader’s incredible chops.

10. LOUIS HAYES: Return of the Jazz Communicators (Smoke Sessions 2014)
From the first note of too-soon departed Mulgrew Miller’s “Soul-Leo,” you are seduced by the captivating swing of this live album! Louis Hayes, who has played with all of the greats of jazz, is a master drummer and knows to keep the musical excitement at a high level. He incites Abraham Burton to some great work on tenor and Steve Nelson to some very fine vibe-work (among many highlights, his playing on “Lush Life”). David Bryant and Dezron Douglas round out the quintet!

11. JD ALLEN: Bloom (Savant)
JD Allen is one of my favorite tenor saxophonists and he displays his highly burnished tone to great effect on Bloom. Particular stand-outs in this regard are “If You Could See Me Now” and “Stardust” where the tonal mastery and deliberate pacing are most evident. Allen’s cohorts here are Orrin Evans, Alexander Claffy and Jonathan Barber.