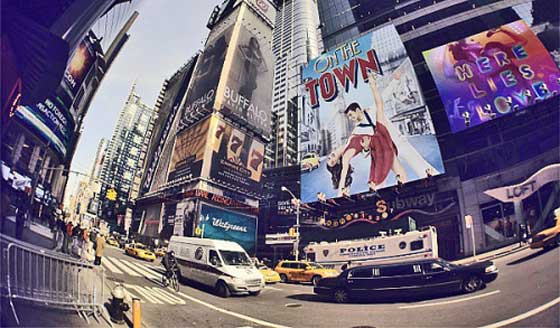 Just as our resident theater companies look to New York City for top talent – from Olympia Dukakis at Shakespeare & Company to director John Rando, who has led productions at Pittsfield’s Barrington Stage, the historic Berkshire Theatre Group and the fabulously star-struck Williamstown Theatre Festival, Broadway seems to have feasted on Berkshire productions in 2014.

In the popular annual readers’ poll conducted by Playbill, its readers chose On the Town as one of their Top 10 shows, plus two from the Williamstown Theatre Festival: Here Lies Love (performed at MASS MoCA) and Bridges of Madison County. WTF’s most recent entry The Elephant Man with Bradley Cooper was edged out by the longer running Curious Incident of the Dog in the Night Time. To WTF’s bold Jenny Gersten – who has left WTF for other challenges – goes our rare standing “O” and raucous applause, sharing the spotlight with that Barrington Stage phenomenon, Julianne Boyd.

The Elephant Man production on Broadway has once again broken the Booth Theatre’s box office record grossing $1,058,547.08 for the week ending December 28, becoming the first show ever to play that venue and gross over $1 million in a single week. Directed by 6-time Tony Award nominee Scott Ellis, The Elephant Man is now playing a limited engagement through Sunday, February 22.

2014 Exhibition by Artists of the Mohawk-Hudson Region [Get Visual]