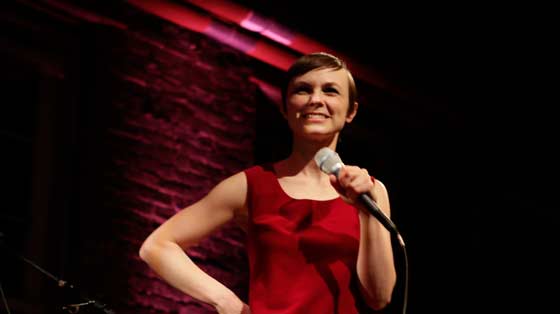 It was one of those cases where “You had to be there” – and I wasn’t: No less than three people I eminently respect still speak in glowing terms about vocalist Kat Edmonson’s last-minute appearance on the small stage at the 2009 Tanglewood Jazz Festival. It was around that time that I received the Texas native’s debut disc Take to the Sky and fell flat in love with her knock-out reboots the Great American Songbook. So when MASS MoCA announced Edmonson would be part of their spring season, there was no way I was going to miss out this time! Six years is a long time, though, and things are definitely different with Edmonson, on more than a few levels.

Gone are the long red hair and the jazzbo wardrobe she wore at Tanglewood, replaced by brown hair in a pixie cut and simple short red dress, accessorized by chunky heels that (maybe) get her up to about 5’6”. Gone, too, is the reliance on old standards, either from bygone days or more recent times. Edmonson’s been letting her Inner Songwriter run the show for two discs, 2012’s Way Down Low and 2014’s The Big Picture, and her influences are many and varied: She described her composition “The Best” as “a cross between the Beatles – “Maxwell’s Silver Hammer” thing – and the theme from ‘Mr. Belvedere’!” One thing that hasn’t changed is Edmonson’s undeniable ability to draw you into the worlds she creates and keep you utterly bewitched, hardly bothered and happily bewildered. And the concert version is just as powerful as the studio model.

Although this was Edmonson’s first appearance at MASS MoCA, this wasn’t her first visit. “Two years ago, I came on a birthday trip, just to see MASS MoCA and stay a little while,” she told us after “Oh My Love,” her bluesy opener. “And I had a ball!” Edmonson’s bubbly, occasionally mischievous vibe said she was out to have a ball on this evening, and we got to have a ball of our own in the bargain. The genre mash-up that is her music – part pop, part jazz, and more than a little country – has a way-cool vibe that stays with you even on sadder material like “Nobody Knows That” and the trainwreck-relationship song “Dark Cloud.” Edmonson’s two-man backup band may have been as minimal as it could get, but between its intimate structure and the respective talents of guitarist Steve Elliott and drummer Aaron Thurston, the background suited the material down to the ground.

Elliott co-wrote “All The Way” with Edmonson, and the love of someone willing to set the one she loves free was displayed for all to see on this two-hander. Elliott’s finger-picking style rang like bells through Club B-10’s high-ceilinged space, and he could set whatever tone Edmonson needed to put her songs across, up to and including the dark patterns required to make Miles Zuniga’s “You Can’t Break My Heart” into “a Spaghetti Western.” Thurston’s drum set is even smaller than Brian Blade’s kit, but as with Blade, it’s what you do with it that counts. Thurston’s hand drumming on the second encore “They Knew” kept the love song from being overwrought, and he’s the first drummer I’ve ever seen with a glockenspiel in his arsenal; he utilized it perfectly on “You Can’t Break My Heart” and “I Don’t Know,” a country love song whose intro evokes George Harrison’s “My Sweet Lord.”

Edmonson told us more than once about her love of old movies, and how she grew up believing adult life would be like an old movie-musical: “Nobody has a job, and if they do, some choreography ensues, and then it’s lunch.” That mindset was behind the bouncing “Champagne” and the happy-go-lucky “Long Way Home,” which was her way to re-write “a big bad first date. I wrote the ending the way I wanted it to go!” Edmonson’s voice still recalls an Old School jazz singer, and you’d think that would clash with her current pop/country stylings. Happily, nothing could be further from the truth. Because she’s not a belter, Edmonson invites you to come closer and share the scene she’s created. In concert, her connection with the audience is even more personal, and you simply can’t help but want to hang out with this woman and let her spin stories as long as she wants.

My favorite moment on Take to the Sky is Edmonson’s a cappella rendition of “Spring Can Really Hang You Up the Most.” Edmonson’s first encore – a last-second change she literally told the band about just before she did it – was an a cappella rendition of James Taylor’s “Sweet Baby James” that changed nothing from the original, except Edmonson’s unique phrasing made the tune all hers. “They Knew” followed, which made sense, because the song is about the happy couple heading off into the sunset, knowing this was the start of years and years together. “I love a happy ending,” Edmonson told us, smiling broadly. So did we. 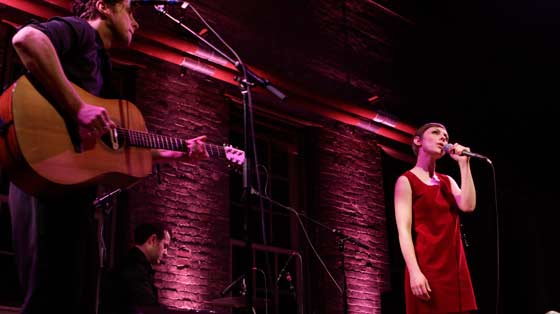 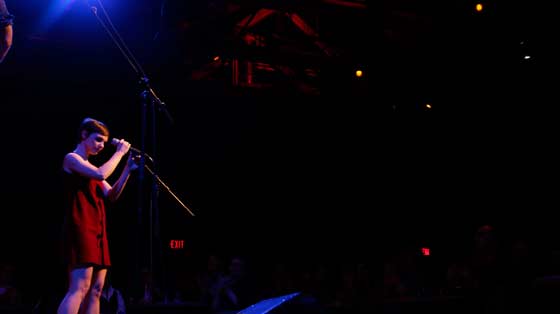