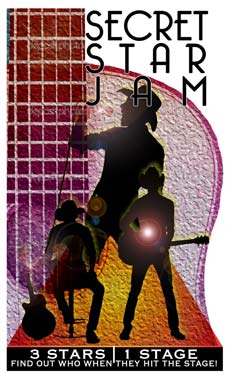 So what is the Secret Star Acoustic Jam? It’s a unique kind of concert concept featuring three country music stars. Here’s how WGNA-FM’s website explains it: “The stars are introduced one by one, each taking a moment to interact with the crowd, then performing one of their many hit songs. Once all three stars are on stage, they each take a turn performing their hits and interacting with you, the audience, in a very unique setting.”

The hitch? Ticket-buyers won’t know who will be performing until the musicians hit the stage.

And just to give you an idea of the caliber of musical talent that’s involved, here’s the round-up of performers at the past WGNA/Proctors Secret Star Acoustic Jams: