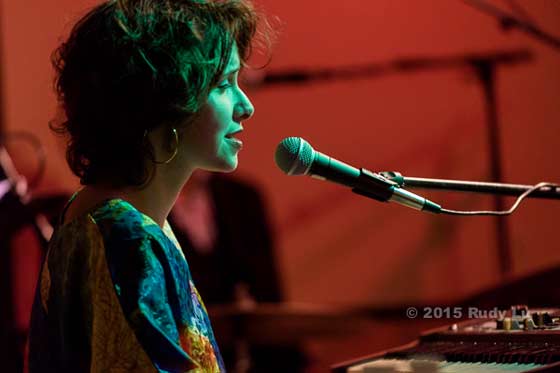 For the first of her two shows on a recent Saturday evening, Nellie McKay descended the stairs at the Van Dyck, sat down at the keyboard and launched into a sparkling instrumental jazz-trio version of the old standard “Pennies from Heaven,” which morphed into “On the Sunny Side of the Street.” And for a moment, it felt as though we were transported back in time to the days of the venerable old Schenectady jazz club when folks like Dave McKenna and Marian McPartland would frequently tickle the ivories.

But just for a moment…

Seamlessly, the medley of jazz standards shifted into McKay’s “Toto Dies,” and she sang, “Hey man what’s happenin’ with you?/I watched that episode too/Maybe I’ll get some Chinese/I’ll have the dumplings/No MSG please…” From there, all bets were off. Backed by drummer Kenneth Salters and the sometimes too-busy basswork of Alexi David, McKay roamed through an almost impossibly vast songbook that stretched from jazz greats Billie Holiday and Ella Fitzgerald to the folk duo of Richard & Mimi Farina to the lightweight British Invasion pop band Herman’s Hermits.

She served up “I’m in Love with a Wonderful Guy” from Rodgers & Hammerstein’s classic musical “South Pacific” and tagged it with a snippet of “Sue Me” from “Guys & Dolls.” She strummed her ukulele for a bouncy rendition of the Cyrkle’s 1966 hit “Red Rubber Ball,” bookending it with the harmonica solo of Bob Dylan’s “I Want You.” She went reggae on her uke for “Caribbean Time,” injecting it with some Cab Calloway-inspired call-and-response from the thoroughly charmed crowd.

And she mashed together the cutesy “Mrs. Brown, You’ve Got a Lovely Daughter,” “Georgy Girl,” a short spoken word segment about feminism (“Did you know that ‘fashion’ has the same root as ‘fascism’?”) and a tear through the Beatles’ “I’m So Tired,” wrapping up the eclectic medley by shouting, “I’ll give you everything I’ve got for a little peace of mind!”

Her own songs were every bit as intriguing, from the ode to mom-and-pop shops “Bodega” to the “Leave It to Beaver”-ish feminist anthem “I Wanna Get Married,” from the black-humored love song “Won’t U Please B Nice” to the rapid-fire, tongue-twisting patter song “Inner Peace.” Just when you thought you had her figured out, McKay’s smart, slyly subversive, alt-pop cabaret show turned another corner down an unexpected, dark alley.

SECOND OPINIONS
Rudy Lu’s review and photographs at Nippertown (Second Show)
Excerpt from Michael Hochanadel’s review at The Daily Gazette: “1960s classics from her new [album] My Weekly Reader came late in the set, some already taking on new forms. After the Cyrkle’s ‘Red Rubber Ball,’ she medleyed ‘Mrs. Brown, You’ve Got a Lovely Daughter’ into ‘Georgy Girl,’ then ‘I’m So Tired,’ with an anti-sexism rap before the belted reprise. After the folk antique ‘Bold Marauder’ came the torchy chestnut ‘All My Life I’ve Been Waiting for You,’ McKay noting its piano solo was by Teddy Wilson and laughing in delight when a fan told her Wilson had played the Van Dyck, too. The Kinks’ ‘Sunny Afternoon,’ McKay doubling on organ and piano, and the reggae strut ‘Caribbean Time’ closed the set before encores of ‘The Dog Song’ with a verse sung Tom Waits-style and some strategic panting and a full, sumptuous uke-powered ‘If I Fell.’ OK, yeah, so ‘very unique’ is redundant; but Nellie McKay is very unique — and a total delight, deluxe. She seems to know every song in the world, and just how to sing it so it’s fresh and new.”

NELLIE McKAY SET LIST
Pennies from Heaven > On the Sunny Side of the Street > Toto Dies
Poor People > Justice (Alan Price)
I’m in Love With a Wonderful Guy (“South Pacific”)
If I Fell (aborted) (the Beatles)
Between the Devil and the Deep Blue Sea (Cab Calloway)
Bodega
Did I Remember? (Billie Holiday)
Inner Peace
Won’t U Please B Nice
I Wanna Get Married
Red Rubber Ball (the Cyrkle)
Mrs. Brown, You’ve Got a Lovely Daughter (Herman’s Hermits) > Georgy Girl (the Seekers) > I’m So Tired (the Beatles)
Bold Marauder (Richard & Mimi Farina)
All My Life (Ella Fitzgerald)
Sunny Afternoon (the Kinks)
Caribbean Time
ENCORES
The Dog Song
If I Fell (the Beatles) 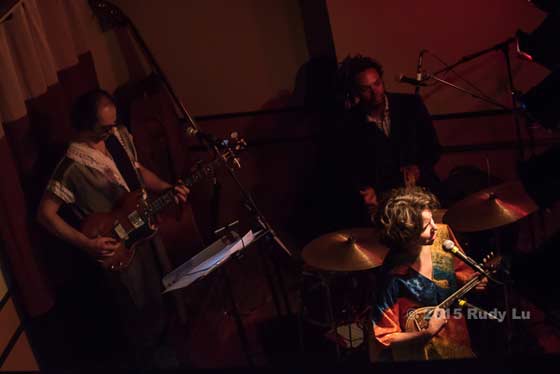 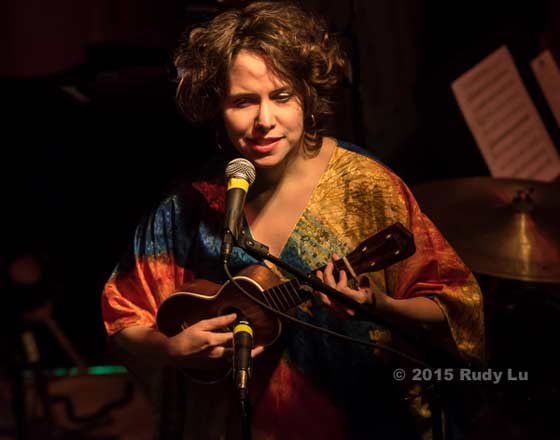