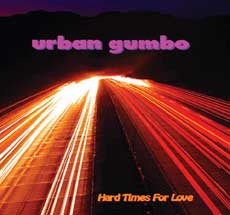 Longtime Local 518 music fans will recall that Urban Gumbo had about a 10-year run on the Nippertown club scene back in the ’90s. They recorded a couple of albums – 11 Stories and Tea Time in Tokyo – before finally calling it quits in 1999. But as it turns out, that wasn’t the end of the story…

A couple of years ago, three of the band’s original members – drummer Bob Girouard, guitarist Rob Piorowski and bassist Gary Butts – recruited some new members and started playing out again – mostly at the River Street Pub in Troy.

And now they’ve just released their loooong-awaited third disc, Hard Times for Love, in celebration of their 25th anniversary.

Urban Gumbo is the perfect name for this band – while there’s an overall rowdy, party-time rock & roll vibe, they don’t stick to any one musical genre – but the songs stick in you ears.

At one point, the band used to describe their sound as “music’s answer to channel surfing,” and that’s still an apt representation of what you’ll hear on Hard Times for Love. Five different bandmembers contributed to the writing of the album’s 10 songs, and five different singers step up to the microphone to handle the lead vocal chores.

For example, the opening romp of “I Love You to Death” is a bluesy duet romp with Joe Quandt (the band’s original lead singer) and Lisa Gordon (the powerhouse new recruit, who also fronts Diva & the Dirty Boys). Gordon swings the tune toward the jazz end of the spectrum with some impressive scatting, while Quandt adds some hip-hop flavor with some surreal rapping. Meanwhile, keyboardist Peter Iselin (another member of the Dirty Boys contingent) slathers on some soulful organ, while Girouard and Butts serve up the syncopated, second-line beat.

There’s a sly sense of humor that slips and slides throughout the album, from Gordon’s steamy blues stroll “Skype Me Baby” (“I don’t want you to text me, don’t send me no tweet/Put your face on my laptop, let your hard drive overheat”) to Butts’ raucous “Dollar Store” (which sounds like it should have been the follow-up to Root Boy Slim’s “Christmas at K-Mart”) to Gordon’s sultry “No More Mrs. Nice Guy” (are you listening, Alice Cooper?).

Along the way, they also dig into a couple of fine vintage R&B covers – “Temptation’s ‘Bout to Get Me” (a sublime Girouard/Gordon duet based on the Rascals’ version) and the Joe Simon nugget “Drowning in the Sea of Love” – that allow the band to stretch out.

In short, Hard Times for Love is a spicey, soulful gumbo of music. Mighty tasty…

Urban Gumbo will be playing their official CD release party at the Bayou Cafe in Glenville at 9pm on Saturday (April 25), sharing the stage with Diva & the Dirty Boys.