Yes, Solid Sound was back at MASS MoCA. The fourth incarnation of the Wilco-curated festival – now a biennial affair – took over the sprawling MASS MoCA campus for three days, holding forth at four different performance locations, as well several of the museum’s galleries. And while rock and roll (in its broadest definition) was the focus, Saturday’s 12-hour line-up stretched from the hushed folk of Jessica Pratt (perhaps a bit too intimate for a festival setting) to the hip-hop of Shabazz Palaces, from the electro-funk of Cibo Matto to John Hodgman’s comedy revue.

Chicago guitarist-singer Ryley Walker and his four-piece backing band kicked off the day with a thoroughly entrancing set of swirling psychedelic jazz-rock fusion highlighted by the title track of his latest album “Primrose Green.” He was followed by the Australian indie-folk duo Luluc and the sublime, oh-so-tasty stylings of guitar master Bill Frisell, who teamed up with avant-folk traditionalist Sam Amidon for a set that featured featured an ode to groundhog hunting, as well as an off-the-beaten-path excursion through a keening ballad rendition of the Kinks’ “Tired of Waiting.”

NRBQ livened up the festival’s festivities with a joyous, romping set of newer songs, with keyboardist-bandleader Terry Adams sprinkling in some old favorites (a stomping rendition of “Me & the Boys” was a particular crowd-pleaser) and a Thelonious Monk tune re-invented in surf-twang mode. Guitar hero Richard Thompson played in power-trio format, tearing through selections from his new Jeff Tweedy-produced album, “Still,” (most notably the aptly titled “Guitar Heroes”), and older nuggets like “Shame of Doing Wrong” and the rip-snorting “Tear Stained Letter.”

But it’s really Wilco’s festival, and they never fail to rise to another level at Solid Sound. After their Friday night headlining set – the band’s first all-acoustic show – they flexed their musical muscles on Saturday with the chugging “Kamera,” the electro-throb of “Art of Almost” and the delightfully mismatched back-to-back pairing of Woody Guthrie’s “Secrets of the Sea” with “Heavy Metal Drummer.” 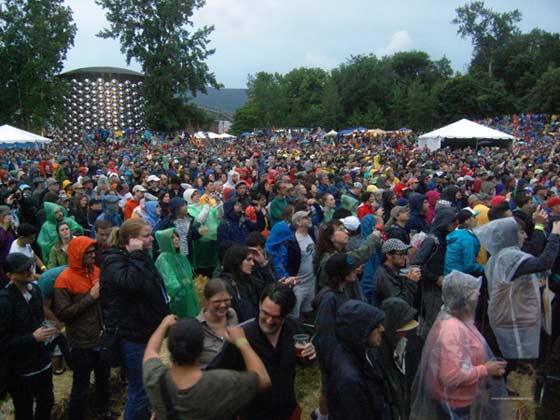