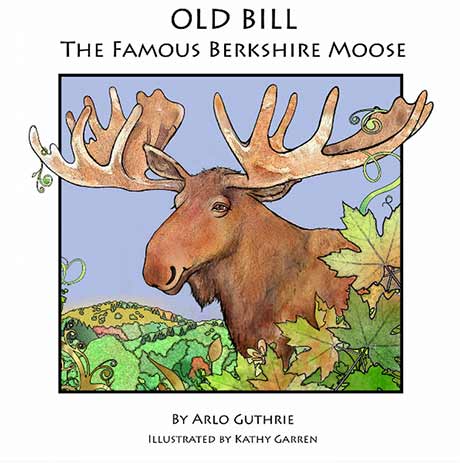 Singer-songwriter Arlo Guthrie will celebrate the publication of his new chidren’s book with a book-signing session at the Berkshire Museum in Pittsfield from 1:30-2:30pm on Saturday (August 29).

Old Bill, the famed moose who now resides at the Berkshire Museum, is the subject of Arlo Guthrie’s new children’s book. Illustrated by Kathy Garren, the book tells the tale of the moose that roamed through the Berkshire Hills and became a legend. Berkshire resident and notable moose-ologist Arlo Guthrie was asked to write an introduction for the 75th anniversary reprint of Walter Eaton’s essay, “Odyssey of Old Bill: The Famous Berkshire Moose.” He did so in the form of a poem, which now has been turned into the charming illustrated children’s book, “Old Bill: The Famous Berkshire Moose.”

Copies of the book will be available at the Museum Shop. The book-signing is included with regular museum admission.

UPCOMING: Arlo Guthrie is slated to bring his Alice’s Restaurant 50th Anniversary Tour to the Colonial Theatre in Pittsfield at 7pm on Sunday, October 11. Tickets are $40, $60 & $75.