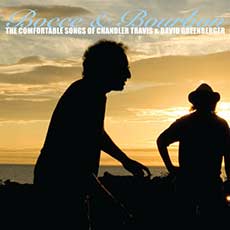 As you can readily deduce from the album title, Travis isn’t the only thread that sews these songs together. The other key element is Greenwich’s own 21st century Renaissance man David Greenberger – visual artist, spoken word performer, conceptualist, Mayor of Duplex Planet and Travis’ sometime co-songwriter for more than 30 years.

“I hate to admit it, and I’m only going to say it once, but all of my best songs were written by David Greenberger, who is also younger than me,” says Travis, adding, “He’s been a constant annoyance for decades.”

Veering from highly contagious new wave-like power pop to rollicking post-modern big band jazz while touching on everything inbetween, the wildly eclectic 19 songs included here indeed span two decades and are culled from eight different albums – from the Incredible Casuals’ 1995 platter It Is Balloon to the Chandler Travis Three-O’s 2012 disc This Is What Bears Look Like Underwater. And they’re all gems.

But what’s most exciting about Bocce & Bourbon is that half of the songs included here are previously unreleased. And from the garage-rockin’ “I Bit the Hand That Fed Myself” to the languid jazz ballad “All in a Day” to the Crash Test Dummies-like “I’ll Wait” to the waltz-time “When Roses Shine in Picardy,” they’re every bit as good, as witty, as honest and as charmingly eccentric as the gems that longtime Chandlerheads know and love. In fact, the bouncy, pop lead-off track “Air, Running Backwards” is simply one of the best Travis recordings – period.

The Chandler Travis Three-O ambles into Caffe Lena in Saratoga Springs at 8pm on Saturday (November 21) for their only CD release party that also features David Greenberger. Greenberger will perform between-song patter, while the Three-O will offer between-patter songs. Tickets are $20 in advance; $22 at the door.