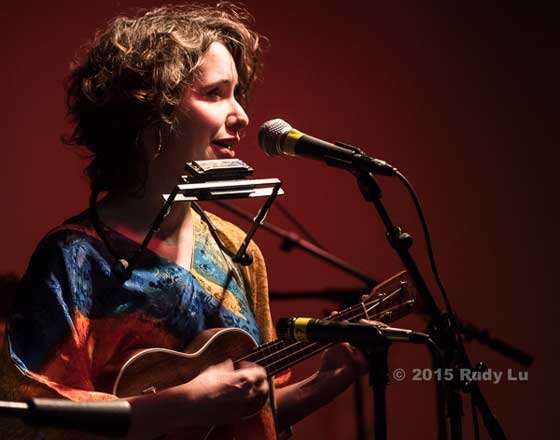 To quote my colleague Stanley Johnson, “This is not a ‘Best Of’ list, because my tastes are mine not yours.” Based upon the 90-plus music performances I attended in 2015, these are my 10 favorites for 2015 in chronological order:

“Reelin’ in the Years: A Night of Steely Dan Music“ @ the Bearsville Theater, Woodstock, June 5: Producer-bassist Scott Petito put together a band of all stars (not hard to do in the Hudson Valley) to pay tribute to a band known for its hummable melodies, tight arrangements and quirky lyrics. Of particular note were the Marotta brothers (Rick and Jerry) sharing the duties on drums, Leslie Ritter and Kat Mills as the “chick” singers and Gail Ann Dorsey performing many of the lead vocals. The audience was frequently singing along. An evening of pure fun.

Charles Lloyd @ Solid Sound at MASS MoCA, North Adams, June 28 (Day 3): Wilco’s biannual festival had two days of sporadic rain but nevertheless was enjoyed by all. The majestic performance of jazz legend Charles Lloyd with guitar great Bill Frisell sitting in was a breathtaking journey through bop, Latin and blues all within a half dozen songs in 80 minutes.

Beacon Jazz Festival @ Seeger Riverfront Park, Beacon, July 25: At the first of a hopefully annual event at the Pete and Toshi Seeger Riverfront Park, the music ranged from both inside and the outside world of jazz with no pop sweeteners to bring in the crowd. Downtown jazz performed outside in Upstate NY on the beautiful Hudson River. Of special note, the Sun of Goldfinger featuring David Torn, Ches Smith and Tim Berne. Ya dig!!!

Felicia Collins @ Music Haven in Central Park, Schenectady, August 9 – Home girl done good and comes home to give a rousing performance of the blues with an amazing band of locals and nationally known musicians such as drummer Anton Figg. A performance that kept the crowd on its feet and dancing most of the time. Best of all, it was free.

Ed Palermo’s Big Band @ The Falcon, Marlboro, October 31: “The Torture Never Stops: 50 Shades of Frank” was Palermo & Co.’s annual Halloween concert complete with costumes, razor-sharp big band arrangements for baby boomers and some side-splitting adult humor. Had to be both seen and heard to be fully appreciated.

“Remembering Lee Shaw” @ Unitarian Universalist Society of Schenectady’s Whisperdome, Schenectady, December 11: A heartfelt memorial concert celebrating Lee Shaw’s life and music performed by seven bands and 23 musicians with others Skyping in from as far away as Germany and China. A truly fitting farewell to Greater Nippertown’s Queen of Jazz.

Those are my Top 10 in the Greater Nippertown area, but there is one performance I was privileged to see in NYC that I have to mention – Jose James’ stand at the Blue Note. James’ tribute CD, Yesterday I Had the Blues: The Music of Billie Holiday, sparkles, but he took it to the next level in concert with lots of interplay and space for his accompanying all-star trio – pianist Jason Moran, bassist Reuben Rogers and drummer Eric Harland.

BEST OF 2015: Tim Livingston’s Cool Rock Event That You Probably Never Heard About, No. 2