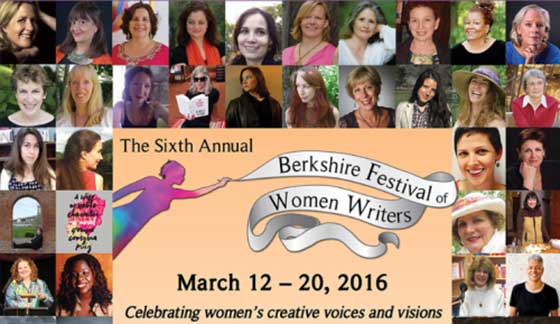 The month of March in the Berkshires is known for maple syrup, as the sap starts flowing in our beautiful forests. But there have been other kinds of creative juices rising in these hills every March since 2010. The Berkshires is also known for celebrating Women’s History month with an outpouring of women’s creative voices and visions, thanks to the Berkshire Festival of Women Writers, now in its sixth year.

This year, BFWW presents a new conference-style festival, offering 33 events beginning on Saturday (March 12). For nine full days more than 60 nationally renowned and local women writers will present workshops, discussions, readings, performances and talks. Many events are free, although some do require pre-registration and tickets.

Among this year’s featured presenters are the young adult authors Jane Yolen and Heidi Stemple, a mother-daughter team, as well as the celebrated food writer and restaurant critic, Ruth Reichl, who will give a brunch talk on Saturday, March 19 at Hotel on North in Pittsfield. Other popular Berkshire writers include Laura Didyk, Lara Tupper, Sonia Pilcer, Alison Larkin and many more.

Jazz at the Lake 2016 Announces Schedule of Bands

Marty Stuart, Country’s Answer to a Blues Griot, Plays The…