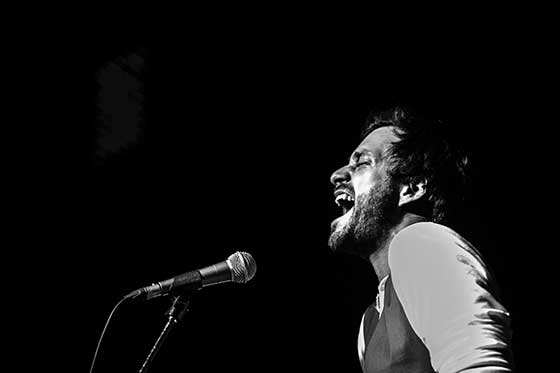 1. THE FIRST ALBUM I EVER BOUGHT WAS … The first album I ever spent my own hard-earned (allowance) pennies on was Green Day’s Dookie in third grade. If a CD had grooves, I would have worn that thing down. Ultimately my parents heard the lyrics and took it away from me. Pretty sure my next album was a triple purchase of Jamiroquai’s Travelling Without Moving (still a favorite), the “Godzilla” soundtrack (pretty decent) and the Verve, because who didn’t love “Bittersweet Symphony”?

2. THE FIRST CONCERT THAT I EVER SAW WAS … My parents were pretty hip and took me to some great concerts when I was young. I actually got to meet Lionel Hampton when he was a 90-year-old drooling on his vibes. He could still play though! I got to meet Dave Brubeck, too, and he’s probably the reason I didn’t quit piano and am a professional today. First “Rock with a capital R” concert was Chili Peppers and Foo Fighters on the Californication tour. I was super young, definitely still in middle school. Changed my life.

3. THE FIRST MUSICAL INSTRUMENT I EVER OWNED OR PLAYED WAS … Piano. Used to stand at the piano when I was barely able to stand and just press the keys. Picked up drums at 12 and guitar at 14. Piano is and always has been my true love, though.

4. THE FIRST SONG THAT I EVER PERFORMED IN PUBLIC WAS … The first original song I ever performed was called “You Say.” I wrote it as a 14-year-old on my brand-new guitar and played it with my early high school band Roostir. We used to play at the local townhouse and in friends’ basements.

5. THE FIRST BAND I WAS EVER IN WAS … The first band I was ever in was called Roostir. The last names of the members spelled COCK and we figured that wouldn’t fly so we went with Roostir with an “i” since the “e” was taken. We were pretty good for a bunch of 14 year olds. I played drums (poorly) and sang lead and back-up. It was a formative experience; we actually played some gigs in the city at some proper clubs as young teenagers. I knew it was what my life would be about even at that young age.

Brooklyn native and former Saratogian Nat Osborn is bringing his seven-piece band up from New York City to play at the Putnam Den on Friday (March 25). The Woolly Mammals open the show at 9:30pm. Admission is $7. Osborn attended Skidmore College from 2004-2008 and lived in Saratoga Springs for a period after. He could often be seen playing piano at One Caroline Street Bistro on Tuesday evenings during that time.