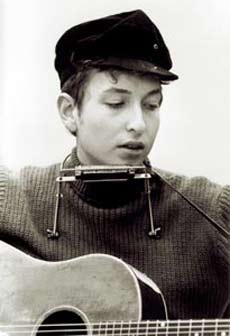 If you’re a music fan in Greater Nippertown, you’re undoubtedly aware that Bob Dylan performed at Caffe Lena very early in his musical career when he was just another unknown folksinger scrappin’ for gigs. It’s the stuff of legend around here…

The venerable Saratoga Springs coffeehouse Caffe Lena is celebrating its 56th anniversary this weekend (with a big concert at Skidmore College on Saturday). And it just so happens that the Caffe’s most acclaimed alum is celebrating his 75th birthday just three days later (that would be Tuesday, May 24), so Caffe Lena is hosting a Dylan tribute concert tonight (Friday, May 20).

Sheer coincidence? Or was there something more to the brief intersection of Bob Dylan and Caffe Lena in January, 1962?

In Stephen Petrus and Ronald D. Cohen’s book “Folk City: New York and the American Folk Music Revival” – published in conjunction with the exhibition of the same name that was presented at the Museum on the City of New York last year – Terri Thal, the wife and manager of Dave Van Ronk, recalls the adventure of booking Bob Dylan into Caffe Lena:

We all became good friends, and Bob spent a lot of time at our apartment. He thought I was smart, but his real admiration was for Dave. Dave taught him a lot about guitar, lectured him on left-wing politics, and encouraged him to read Bertolt Brecht, the Goliard poets, and Francois Villon, all satirical critics of their societies. Bob’s fascination with these poets showed up later, in his songwriting.

His girlfriend Suze Rotolo introduced him to theater and visual art. The four of us roamed around the Village, eating breakfast in mid-day and playing penny poker in my kitchen in the evening.

One day Bob asked me, “Would you get me gigs?” I said, “I’ll try.” I didn’t even think of asking him to sign a management contract; we were friends.

I took an audition tape to clubs in Springfield, Cambridge and Boston, Massachussetts. No one booked him. I got him an appearance at the Caffe Lena in Saratoga Springs. Whenever owners Lena and Bill Spoencer found themselves without a performer, Lena would call me, and I would find someone to go there. When I asked her to book Bob, she objected because he was too new and unknown. “Every time you need an act at the last minute, I find one for you,” I said. “Now I want a favor.”

Bob played there and bombed. The audience talked throughout his performance. At the end of the weekend, Lena called and told me never again to ask her to book Bob Dylan into her club.”