Before the show started, Ian Felice laid flat out in the grass behind the Riverfront Park stage, while Greg Farley warmed up by playing his fiddle farther off in the background, alone. Other band members mingled with friends. A Porta-john labeled “VIP Bathroom” resided in the tiny backstage grassy space amongst a band van and a couple of cars. In front of the stage an older woman tried to get her three oversized hula-hoops airborne and in motion while a transvestite moved through the people up front near the stage. It was a laid back, comfortable scene, well attended and well appreciated.

Band members put their own instruments in place on stage and checked the tuning before launching into “Lion.” They followed that with “Aerosol Ball” for their second offering. It was a precursor for performing all but two tunes from Life in the Dark, their brand new nine-track album released in June 24. A cardboard hand-written set list at Ian’s feet listed 31 songs with two options for the performance. The set list was titled “120 minute set or two 45 minute sets with a 30-minute break.” They opted for one long set and played it right through without offering an encore. The long and generous performance negated the need for more, even though fans and converts sustained the cheers long and loud enough to justify one.

During “Triumph ‘73” Ian emphasized his guitar lines with body language similar to that of kick starting a motorcycle. The band upped the ante considerably on the fourth song, “Cherry Licorice.” That bouncy upbeat tune was then tempered by “Diamond Bill,” which Ian introduced as “this is a long ballad.”

At this point, from three directions, I heard some male fans each separately stating, “Boy, he sounds like Bob Dylan” or “He is like an early Dylan.” Remember the ’70s and ’80s when journalists would hang “the next Bob Dylan” label on any good singer songwriter coming along like Loudon Wainwright III, John Prine, Bruce Springsteen, Willie Nile or Steve Forbert, and especially more so if they incorporated a harmonica into their work? Of course, the Felice family roots in Palenville, just up the road from West Saugerties, Big Pink and Dylan’s ’60s Woodstock home, only fuel the comparisons. The great keyboards and accordion of James Felice draw references to Garth Hudson circa 1968-1976. Supposedly someone recently asked Ian about comments that they can sometimes sound like The Band, and his response was something like, “I think The Band sometimes sounds like us.”

As the show moved on from “Cherry Licorice” different band members took on their important roles impressively. Josh Rawson (bass) and Greg Farley (fiddle) each had lead vocals at some points, and all had lead instrumentals along the way. Hell, there was even a brief solo by drummer David Estabrook. More than individuals trying to command the spotlight, these boys are a great collective, close friends and each are all in. When I reviewed my photos from the show you could see the energy build throughout the show to a climax of “Frankie’s Gun” near the end.

When they really get going all the instruments crash and bounce into each other, making glorious careening noise. I remember the first time I heard Music From Big Pink and being totally perplexed about the colliding, careening sounds and the complexity of it, and how by the third or fourth time I listened it all sounded so natural and perfect. It was the perfect album. The Felice Brothers go down that road too. One of my favorite Felice songs, “Wonderful Life,” was on the cardboard set list, but sadly it was not performed. A notable surprise cover offering was Jimmy Cliff’s “Many Rivers to Cross.”

The Felices’ Life in the Dark album is a perfect statement for our times emotionally, if not literally, especially songs like “Aerosol Ball” and “Jack at the Asylum”…

“America, America…
I’ve seen your pastures of green,
crack whores,
the wars on the silver screen,
Hiroshima and the lynching tree.
It’s a wonder my eyes can still see.
America, America,
you give me nightmares…”

As the commentary amongst talking heads on TV news networks these days bounce between making America great again versus America IS great and the best country in the world, “Jack at the Asylum” ends with “America, America, you give me dreams to dream.” Nightmares versus dreams, like Trump versus Michelle Obama’s inspiring Democratic Convention speech. “Aerosol Ball,” driven along by James Felice’s accordion playing, compares things as products, corporate brands, or different kinds of rain: “The rain in Maine is made of Novocain, in the Florida Keys its made of anti-freeze, in Maryland its made of heroin…”

Life in the Dark is a tour de force. It is one of those special albums where each song is important, relevant and necessary, and where nothing can be disregarded. Unfortunately this aspect will not be realized by many in this age of skipping around YouTube to hear music, rather than listening to an album from beginning to end, all songs in sequence, as a piece of art like Life in the Dark is.

At the end, from the stage, Ian exclaimed, “I’ve never been to Troy. It’s an awesome city. I love Troy. I’m gonna move here. It’s all good. It’s all good”… 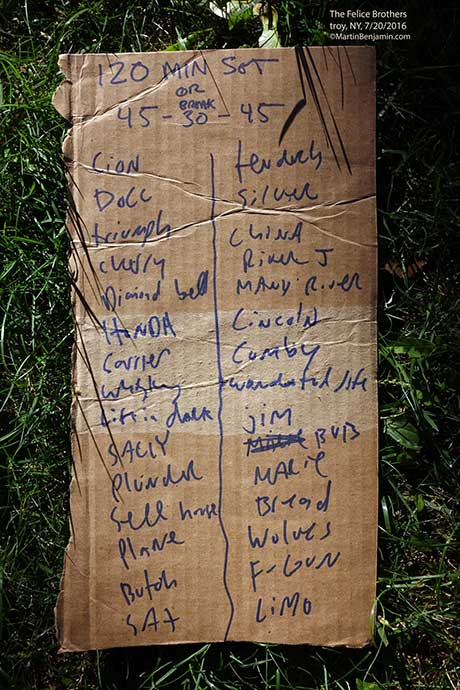