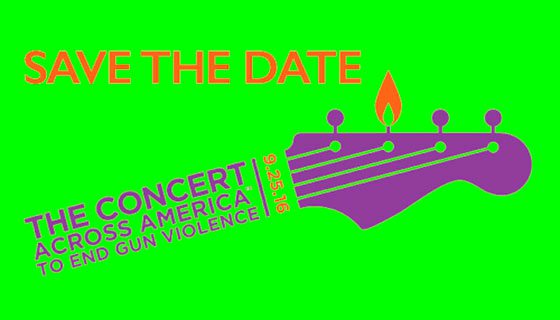 The Concert Across America to End Gun Violence is a nationwide series of memorial events in more than two hundred venues across America on Sunday (September 25), the date designated by Congress in 2007 as a day of remembrance for gun violence victims. Organizers and musicians will sing out in memorial and draw attention to the nation’s epidemic of gun violence, prior to the first Presidential debate, final voter registration days, and the 2016 elections. To date there are more than 20 concerts scheduled to take place in Massachusetts alone.

The Berkshire concert will take place from 2-5pm on Sunday (September 25) at the Society of the Congregational Church in Great Barrington.

All performances are contributed by local Massachusetts musical artists, and in the Berkshires they include such luminaries as Maureen O’Flynn, Bobby Sweet, David Reed, Terry a la Berry, Teresa Mango, David Grover, the Beeline Ramblers and the Matchstick Architects, as well as surprise guest artists. Some of the artists have written songs after mass shootings.

FESTIVAL FEVER: What a Weekend!