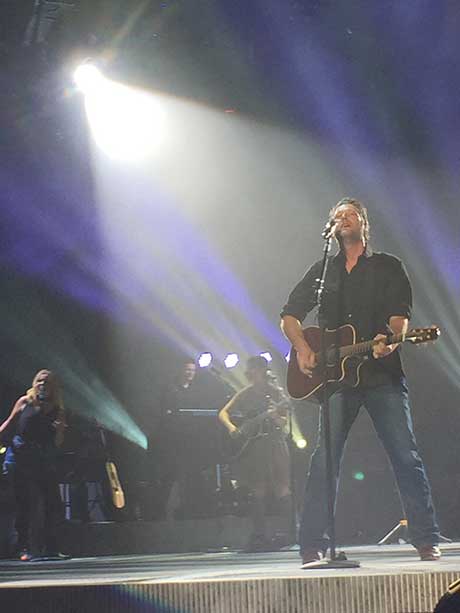 Blake Shelton has parlayed his high-profile gig as coach on NBC-TV’s “The Voice” into true superstardom. But judging my his performance at downtown Albany’s Times Union Center last month, he’s still got enough of an aw-shucks, country-boy persona in him to make his music sound genuine and sincere.

From his first hit (“Austin”) to his recent kiss-off “She’s Got a Way with Words,” Shelton has always known how to sell a song, and in concert, he worked the catwalk like a seasoned pro, utilizing every opportunity to get up-close and personal with the fans.

SECOND OPINIONS
Excerpt from Steve Barnes’ review at The Times Union: “Shelton is a bit of a goofball, and he gets the joke even when it’s on him. He knows that ‘Some Beach’ is a Jimmy Buffet rip-off, complete with mention of margaritas, and he knows that ‘Ol’ Red,’ a song about a prison dog first released by George Jones, is more authentically old country than anything Shelton has recorded. And he admits that he doesn’t have a song that will make the crowd — which he happily inflated to three, four and even five times its actual size — illuminate their cellphones as if they were Bic lighters of decades past, so he borrows Michael Bublé’s ‘Home’ and does a right fine job with it, too. This is pop-rock country, with invocations of trucks and girls and drankin’, driven by power chords and thickly applied harmonies on the choruses. Shelton romped through ‘Kiss My Country Ass’ and ‘Hillbilly Bone’ and ‘Sangria’ and, of course, ‘Boys ‘Round Here,’ but he also skewed gentle on ‘Doin’ What She Likes,’ ‘My Eyes’ and ‘Lonely Tonight.’ His voice is strong and clear, broad at its baritone bottom and unforced at the top of his range. And his personality is utterly winning. TV hasn’t completely taken him over, at least not yet.”

Excerpt from Kirsten Ferguson’s review at The Daily Gazette: “A bit of muddy sound at the start improved over time, and Shelton – dressed in blue jeans, a black Western shirt and alligator boots – worked the crowd throughout the night by walking a catwalk out into the audience, where he shook hands, slapped high fives and took selfies with enraptured fans. Shelton has scored over 20 number-one hit songs since releasing his self-titled debut album in 2001, and the evening offered quite a few of them, including show opener ‘Neon Light,’ Jimmy Buffet-inspired fantasy ‘Some Beach,’ dark drama ‘Sangria,’ and romantic ballads ‘Doin’ What She Likes,’ ‘Mine Would Be You’ and ‘Who Are You When I’m Not Looking.’ Newer hit ‘Came Here to Forget’ was a rebound tale purported to be about Shelton’s recent high-profile romance with pop star Gwen Stefani, who didn’t appear onstage, despite her recent appearances with her beau at tour stops in Minnesota, Illinois and Oklahoma. Backed by a black-clad band, who kept a low profile but provided seamless backing, Shelton urged the crowd to join him singing on smoldering duets ‘My Eyes’ and ‘Lonely Tonight.’ Then the voice coach critiqued the crowd’s performance, saying the pitch was good but the inflection was pure ‘hillbilly.’ It was really just a lead-in into his hit ‘Hillbilly Bone,’ a rollicking tune punctuated by yee-haws.” 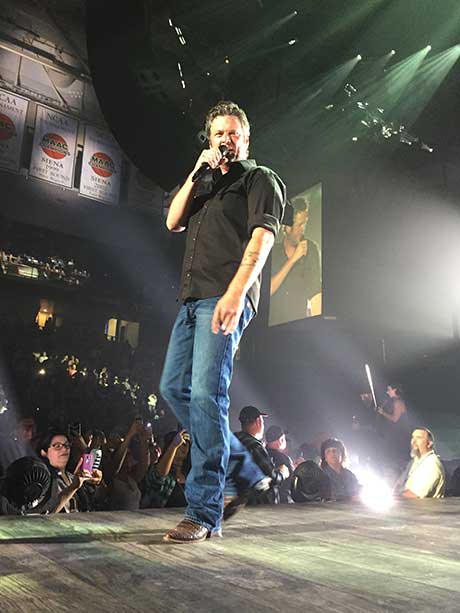 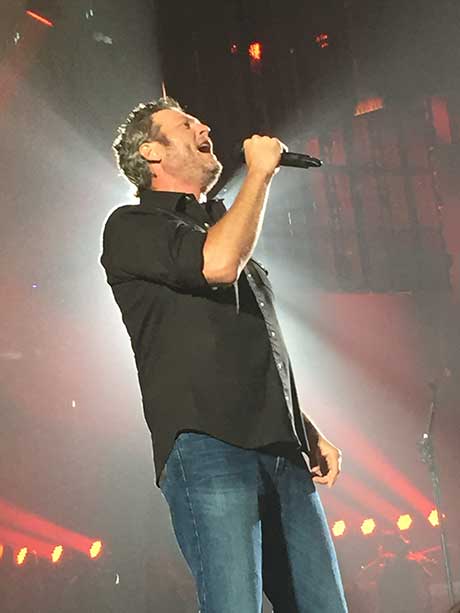 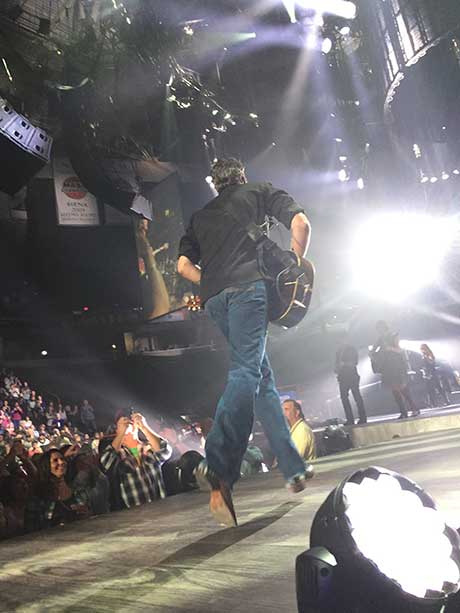