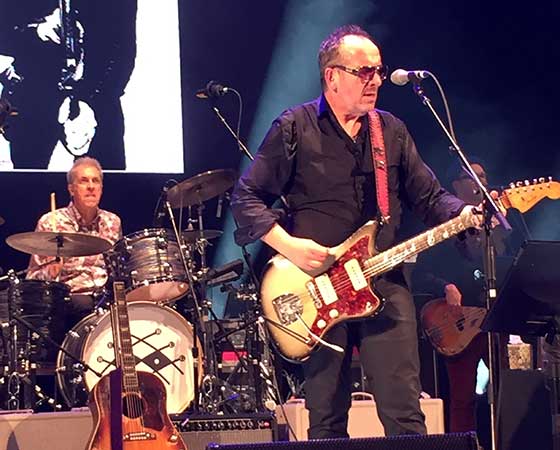 Elvis Costello’s two most recent Greater Nippertown appearances were pretty much polar opposites – a solo ramble at the Troy Savings Bank Music Hall in 2013 and a breathless blitzkrieg, full-band opening set for the Police reunion concert at SPAC in 2008.

Given the Palace Theatre stage as a headliner with a full band on Wednesday, Costello split the difference right down the middle – a bigger punch than his solo outing, not quite as electrifying as the short SPAC set.

Not that it wasn’t quite a brilliant performance. It was indeed, and there were quite a few thrilling moments throughout the evening, but it would have been quite a challenge for Costello & Co. to cut loose and really tear it up, as they were focused on – although certainly not exclusively restricted to – Imperial Bedroom, perhaps the most pivotal album in his long and eclectic musical career. There’s not a rock song on the album, and the lush, orchestral production by George Martin disciple Geoff Emerick is pretty much impossible to duplicate live, especially in the Imposters’ minimalist, straight-forward rock band format – bass, drums, keys and guitar.

So of course, Costello took the road less traveled. Imperial Bedroom is far from his best-selling or best-known album, and it’s not big anniversary year for the 1982 album. He played 12 of the albums’ 15 songs, but he didn’t play them in sequence, nor did he play them all together. Rather he interspersed them throughout the two-hour-plus concert with other cherry-picked gems from his career. So the bristling bash-and-crash of “Lipstick Vogue” was inserted between “The Loved Ones” and “…And in Every Home,” while a hushed, soulful “Shabby Doll” was the lead-in for a pulsatingly dramatic treatment of “Green Shirt.”

Costello wisely decided to mix things up on the Imperial Bedroom songs, too. The most radical re-invention of the night was a riveting rendition of “Tears Before Bedtime,” with the jaunty, Squeeze-like pop bounce of the album version abandoned in favor of slinky, almost dirge-like arrangement that musically matched the dark lyrics.

The biggest disappointment of the night was “Watching the Detectives.” Although musically on target, Costello’s performance was undercut as he sang in near darkness, overshadowed by a parade of pulp fiction book covers and film noir posters projected on the overhead screen.

And while his voice started to sound a bit shaky during the encore of “Town Cryer,” Costello recovered with a sensuous swing ‘n’ sway through “Clubland” followed by a no-holds-barred blast through “Pump It Up” and “(What’s So Funny ‘Bout) Peace Love and Understanding,” which finally brought the crowd to their feet.

ELVIS COSTELLO & THE IMPOSTERS SET LIST
The Town Where Time Stood Still
The Loved Ones
Lipstick Vogue
…And in Every Home
You Little Fool
Accidents Will Happen
Tears Before Bedtime
Moods for Moderns
Shabby Doll
Green Shirt
Watching the Detectives
Human Hands
Kid About It
Less Than Zero
Pidgen English
Alison
Shot With His Own Gun
Almost Blue
The Long Honeymoon
Man Out of Time
Party Girl
ENCORES
Everyday I Write the Book
Town Cryer
Clubland
Pump It Up
(What’s So Funny ‘Bout) Peace, Love and Understanding

SECOND OPINIONS
Excerpt from Jim Shahen Jr.’s review at The Times Union: “In an introduction to ‘Tears Before Bedtime,’ Costello explained that he crafted a jaunty melody for it to mask his own feelings. The version he proceeded to play was stripped of its gloss and transformed into a powerhouse ballad that showed that while Costello’s vocals are less youthful sneer and more rough-hewn, he can still belt ’em out. ‘Moods for Moderns’ and ‘Shabby Doll’ also played into the evening’s presentation of Elvis-as-garage rocker, with ‘Shabby Doll’ featuring a slinky groove, funky bassline and couple of tight guitar solos from Costello. Soon after came version of ‘Alison’ that saw Costello strumming the electric guitar with vocal accompaniment by back-up singers Yahzarah and Kitten Kuroi, as well as from an audience excited to hear one of his most recognizable tracks.”
Excerpt from Michael Hochanadel’s review at The Daily Gazette: “Costello happily celebrated bristling bon mots, merry/melancholy melodies and genial swagger, a perfectionist craftsman amid rough-and-ready punk; a pure popster raised by a big-band trumpeter in the echo of Johnny Rotten. Costello played (mostly) electric or acoustic guitar, chopping chords restlessly against his band’s confident muscular riffing. With nowhere to hide (no other guitarist), Costello had to carry the weight, and did. Singers Kuroi and YahZarah were terrific, singing on the money and animating the songs with their moves. Most melodies moved at medium tempos, framing words Costello occasionally explained. ‘Romantic misery’ prompted ‘You Little Fool,’ he said, but another note from Girls Girls Girls better highlights their off-hand, heads-up grace: ‘Words seemed to fly straight through the moving window and come out of my mouth or my pen.’ On Wednesday, they flew out of his cracked, quavering croon and the punch of his band.” 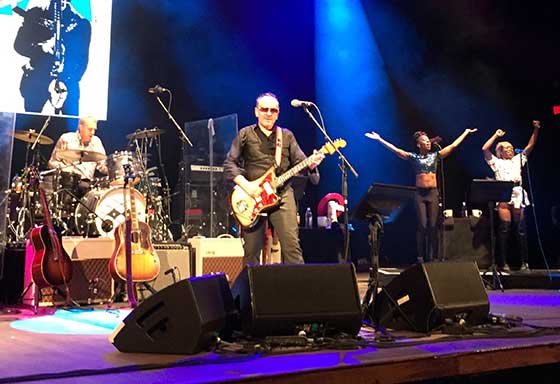 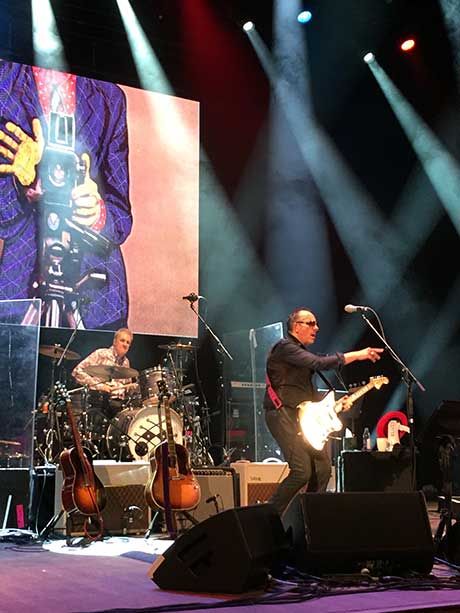 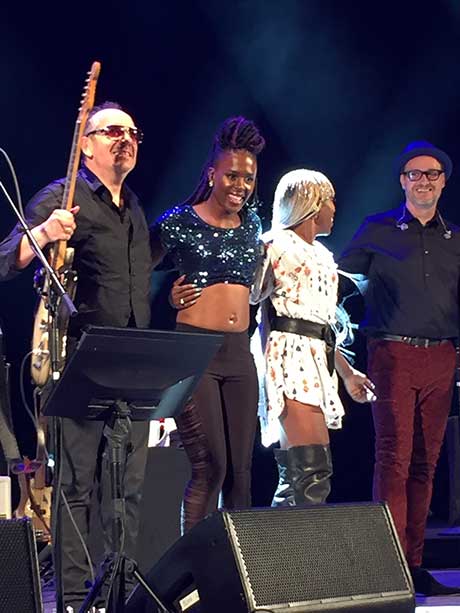