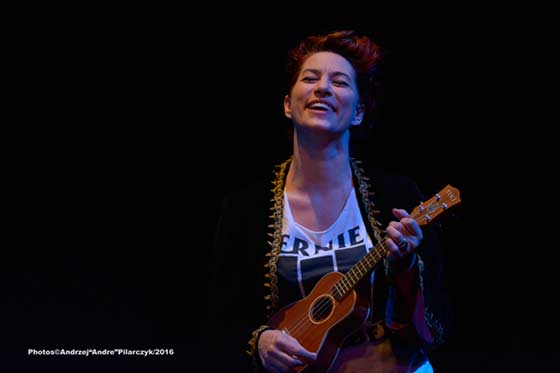 It wasn’t really a concert…

It was a group therapy session. A wake. A rally. A story hour. And, yes, a concert, too.

It was three hours and 15 minutes of Amanda Palmer’s soul-baring songs and equally brutally honest verbal meandering in between. Palmer’s concerts are typically somewhat free-form affairs. But in the wake of Tuesday’s election, Palmer’s Thursday night launch of her American solo tour was at times a rambling, shambling affair. A glorious one…

“You thought you were going to The Egg and hear some Amanda Palmer songs,” Amanda Palmer said with a cackling laugh to the sold-out crowd of devoted fans that packed The Egg’s Swyer Theatre on Thursday evening. “You were fooled…”

Well, not completely fooled. Eventually, the crowd did get to hear a solid batch of Amanda Palmer’s deeply personal, fearlessly honest songs.

But first, she walked out on stage in a Bernie Sanders t-shirt, holding a ukulele aloft as though it were the Olympic torch. Then she held up a book in her left hand, another symbol of triumph. It was Margaret Wise Brown’s classic children’s book, “Goodnight Moon,” which she took to be a talisman for peace and healing.

She kicked off the first show of her American solo tour by sitting down in a center-stage chair and pouring herself a glass of red wine. Clearly reeling from Tuesday’s election results, she explained, “My plan is to read you ‘Goodnight Moon’ for two hours if I have to, until we all feel OK.” And then she read the book to the crowd as though it were bed-time story hour, even recruiting a page-turner from the audience.

She played a few songs on her ukulele (“In My Mind” and “Do You Swear to Tell the Truth, the Whole Truth…”) and then moved over to the grand piano for a couple more (the cathartic “The Killing Type” and the waltz-time “The Bed Song”), frequently interrupting the songs with asides or lyrical lapses. Her year-old son Anthony made the first of his many concert interruptions, banging on the piano with a decidedly Cecil Taylor-like note-cluster flair on the later tune.

Another reading of “Goodnight Moon”…

A few more piano songs (the piano-pounding “Lost” and “Delilah”) before someone in the audience broke the news that singer-songwriter Leonard Cohen had died. Palmer collapsed to the stage, weeping quite uncontrollably.

Palmer’s husband, author Neil Gaiman, who was sitting in the front row with Anthony, stepped up onstage to read “Goodnight Moon” (take three) while Palmer gathered herself together.

Palmer recited the lyrics to “My I.Q.” by Ani DiFranco, whose concert she had attended at The Egg the previous evening. Then she invited representatives of Planned Parenthood and the New York Civil Liberties Union onstage to give speeches.

In honor of Gaiman’s birthday, Palmer brought out a marching band bass drummer, a baton-twirling cue-card holder and a trumpeter in a white jump suit, mask and alien antennas to perform a medley of David Bowie songs and a chorus of “Happy Birthday.”

More songs on the uke (“Map of Tasmania” and the soul-baring “Bigger on the Inside”) and the piano (“Coin Operated Boy” and Half Jack,” both from her Dresden Doll days). A stunning cover of John Grant’s majestic ballad “Glacier,” a zippy romp through her playful, hopeful “Ukulele Anthem”…

And then finally after more than three hours of rambling, exhausting, roller coaster emotions, she wrapped up the night with an elegiac, broken-hearted, tear-stained rendition of Leonard Cohen’s “Hallelujah.”

“You’re going to be OK,” she said softly as she left the stage.

This review was originally published in The Times Union… 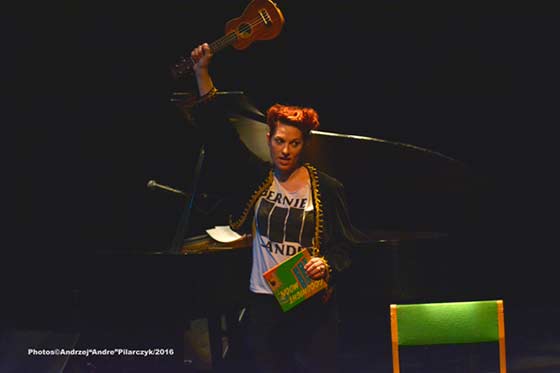 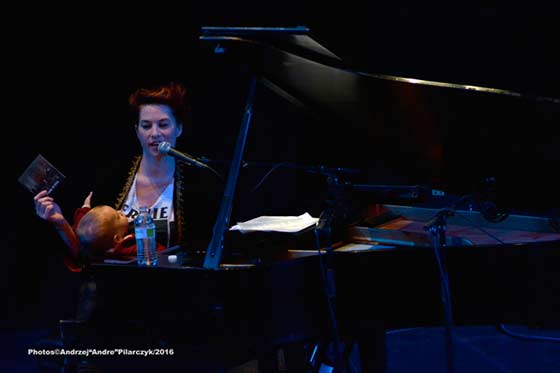 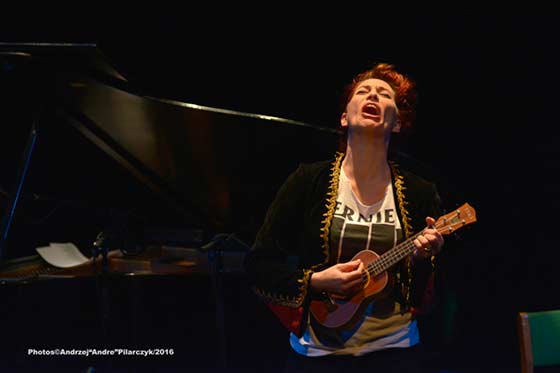