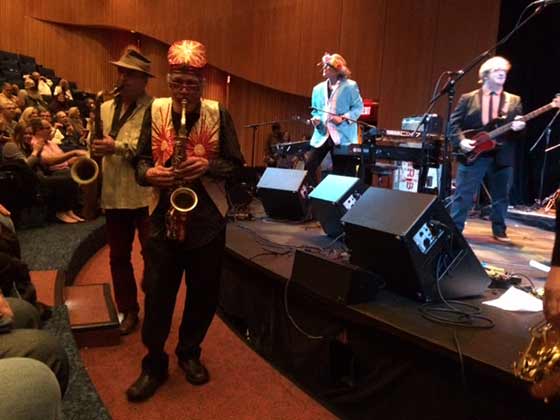 This tour is ostensibly to support the band’s new five-disc anthology, High Noon: A 50-Year Retrospective, which was officially released on the day of the concert. And while they didn’t play all 100-plus tracks from that collection, the band did take a wide-ranging stroll through their impressive catalog, ultimately playing somewhere around 35 songs (I was having so much fun I lost count – sue me!).

Adams, the sole remaining original member, is, of course, the heart of the band, a towheaded, grinning, mischievous, overgrown Dennis the Menace character pounding his two keyboards with technique that would leave piano teachers shaking their heads in dismay but nonetheless sounded damn good. Adams shared vocal duties with bassist Casey McDonough (who boasts an appealing tenor yelp well-suited to songs of yearning such as “I Want You Bad”) and guitarist Scott Ligon, who handled the more straight-forward, rootsy Americana tracks.

Drummer John Perrin, dressed to travel the spaceways in gold sequins, has only been with the band since May, but he seemed quite comfortable with the material and proved to be indefatigable as the set climaxed with rollicking versions of “Get Rhythm,” “Wacky Tobacky” and Huey “Piano” Smith’s “Rockin’ Pnuemonia and the Boogie-Woogie Flu.”

There were highlights a-plenty, including the ageless “Me and the Boys,” “Howard Johnson’s Got His Ho-Jo Workin’,” “Ridin’ in My Car,” a rousing cover of Clarence “Frogman” Henry’s “Ain’t Got No Home” and, of course, “Rocket in My Pocket.”

There was also a ton of silliness, as NRBQ fans have come to expect: “Boozoo, That’s Who,” “Captain Lou” and the jazzy lounge muzak of “Time & Place.” The horns were used to good effect as well, with Allen contributing a frankly lascivious tenor solo on “Time & Place” followed by a captivating turn from Thompson on baritone sax. 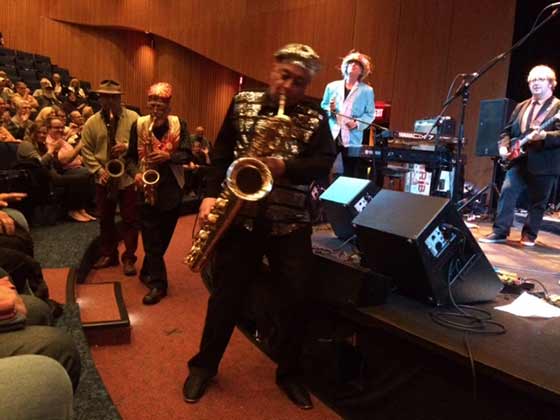