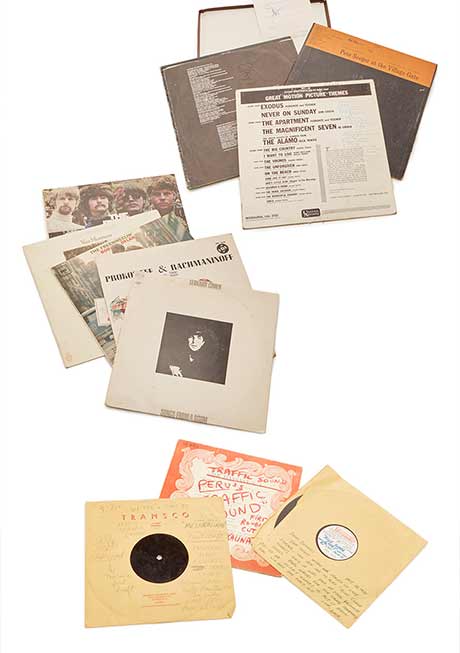 How much would you pay for 110 records from the personal collection of the late actor/director Dennis Hopper?

Hopper’s daughter Marin is selling the batch of albums on Womenswear retail site Moda Operandi. The site claims that the batch of albums includes “handwritten notes to the actor from various artists and several unreleased records,” but doesn’t offer any specifics. The asking price? $150,000.

Here’s the blurbage from the sale site:

With a career spanning almost six decades as an actor, filmmaker, photographer, artist, art collector and Hollywood enfant terrible, Dennis Hopper collected over 100 record titles during his lifetime. Including iconic artists and bands such as the Beatles, Bob Dylan, Van Morrison, Fleetwood Mac, Leonard Cohen and Miles Davis, this collection provides an incredible view into the world of one of America’s most culture-defining men.

Along with handwritten notes to the actor from various artists and several unreleased records, this is a very personal biography of Dennis Hopper’s musical journey, directly from the archive of Dennis’ daughter, Marin Hopper.

A portion of the sale price will be donated to The Future Heritage Fund, which was founded in partnership with the New Mexico Community Foundation (NMCF) to support a range of cultural and artistic non-profit organizations in New Mexico.

However, the collection also apparently includes a 1970 recording of “Blue Suede Shoes” that Carl Perkins made specifically for Hopper as a gift from Zack Van Arsdale.