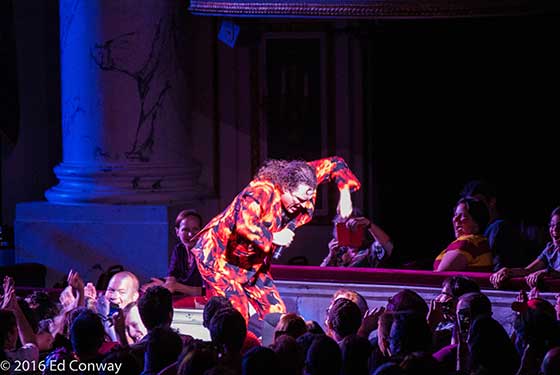 Yes, it’s that time of year once again – best of the year list-time, that is. We’re gathering together Best of 2016 from various media outlets, our own contributors and our readers, too.

Here a list of the Top 10 Concerts of the Year, as compiled by Nippertown contributor Kathy Conway:

We are incredibly lucky to have so many great venues in Greater Nippertown and so many musical acts that play here. Thank you, Nippertown, for all you do every day to get the word out to the audience about these wonderful events. I was fortunate to have had the opportunity to attend many of them.

Here are some of my favorites, which included several new-to-me venues while seeing both national and local acts:

10. Hey Jude…The Tribute @ the Madison Theater, Albany, 4/29/16. The best Beatles tribute I’ve seen. This band is the real deal, right down to the costumes and hair styles. They sing the songs we grew up to and love singing along to, which is always great fun. The band is comprised of local musicians Tom Raider (John Lennon), Brad Jarvis (Paul McCartney), Rick Bedrosian (George Harrison), Don Ackerman (Ringo Starr) and Rich Coogan (keyboards/percussion). If you’re feeling nostalgic, definitely check these guys out – yeah, yeah, yeah! This was also the first show I’ve attended at the Madison Theater, and I look forward to visiting again soon.

9. The Holly & Evan Band with DJ Intel Hayesfield @ the Newberry Music Hall, Saratoga Springs, 10/22/16. My first opportunity to see a show at this venue, and it was also my first time seeing opener DJ Jamel Mosely. The music, the lights, the dance floor helped to set up an “ultimate dance party” with the four-piece Holly & Evan Band, which includes Holly Taormina (guitar/vocals), Evan Conway (bass/vocals), Bob Morris (drums) and Josh Greenberg (sax). The band filled the room with their original sound that combines elements of funk, blues, soul and alternative rock. I look forward to attending more shows at The Newberry Music Hall, which shares its location with the Comedy Works on Broadway in Saratoga Springs.

8. McKinley “Mikey” James @ the Beer Belly (now named Albany Ale & Oyster), Albany, 4/15/16. This extremely talented 14-year-old young man can play the guitar flawlessly, and he had an opportunity to show off his skills at this venue on two occasions this year. His contagious sounds lend themselves to the genre of rockabilly, and James already has a following, which is pretty cool (and well-deserved). If you see he is playing in the area, catch his show and see this amazing talent. And, of course, bring your dancing shoes and come ready to have some fun!

7. The Lustre Kings with Eddie Clendening @ Club Helsinki, Hudson, 1/15/16. A great one, too. Are you an Elvis fan? Well, the stage here is definitely set for a tribute to the King, and there are none better to do this honor than the Lustre Kings and Elvis lookalike Eddie Clendening! Each January, around Elvis’s birthday, you will most likely find a tribute show or two on the events calendar. I highly recommend checking out this local band on any occasion and, if clendening happens to be touring nearby, definitely put on your blue suede shoes and find your way there. Elvis will certainly be in the building!

6. Bloodshot Bill @ The Fuze Box, Albany, 3/19/16. This one gave me the chance to check out a new venue. I’ve seen Bloodshot Bill several times before, so I made it a point to catch him on this tour as he traveled through Albany on his way back home to Canada. His music is very original in style and sound, and the artistic wall backdrop at the Fuze Box is truly a work of art that adds to any show. Next time he comes to town, check out his show and his perfectly styled hair. You’ll be glad you did!

5. The Fleshtones @ the Hangar on the Hudson, Troy, 10/15/16. Another great one. These guys toured our area and played a sold-out show at The Hangar, which was a great welcome back for Troy native Bill Milhizer’s drums and vocals. Other members of the band include Keith Streng (guitar/vocals), Peter Zaremba (lead vocals/harmonica/organ) and Ken Fox (bass/vocals). The Fleshtones have been around for several decades. If you like garage band music and you see them playing at a venue near you, do yourself a favor and catch this high-energy act!

4. The Dust Bowl Faeries @ Club Helsinki, Hudson, 3/6/16. Another of my favorites. I got to attend their magical album release party for their self-titled debut CD. The gothic folk quartet featured founder Ryder Cooley on accordion, 6-string ukulele and singing saw, accompanied by Karen Cole (lap steel/vocals), JoAnn Stevelos (percussion), Jen DuBois (electric guitar/vocals) and Chad Dziewior (bass). If that’s not enough, Hazel, a taxidermy sheep, joins the band as a spirit animal go-go dancer! Do check out this original and talented band if you get the chance.

3. Rocky Velvet @ the Hangar on the Hudson, Troy, 11/26/16. The 20th anniversary reunion of Graham Tichy, Ian Carlton, Jeff Michael and Jay Gorleski resulted in a great show in release of their 45RPM vinyl single “Shuckin the Corn” and the digital release of the great lost Rocky Velvet album of the same name. They put on a very entertaining, energy-filled show to celebrate their big 2-0, and everyone at The Hangar had a great time. Cheers to the next 20 years, guys!

2. Leon Russell with Dave Mason @ The Egg’s Hart Theatre, Albany, 2/28/16. Another great night, with opener Dave Mason leaving everyone “Feeling Alright” and ready for Leon Russell’s driving piano, which had the crowd riveted from the start to the finale of “Roll Over Beethoven.” Thank you to The Egg for bringing this show to town. Sadly, we lost Leon Russell in 2016.

1. Weird Al Yankovic @ Proctors, Schenectady, 9/17/16. Topped my favorites list. The night was full of the contagious energy that has become a hallmark of Weird Al shows, and the show itself was a great production that featured several costume changes for the entire band. You know Weird Al has stood the test of time when, in many cases, the audience knows his versions better than the original songs. It is also great to see that Proctors is bringing more music acts to their lovely stage, and I hope to see more in the future.