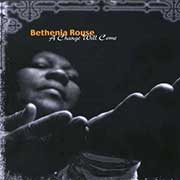 The Rev. Bethenia Rouse passed away on Wednesday (December 28) at age 81. The pastor of the Christian Faith Church in Schenectady, she along with TV talk host Carla Page and the late Marva Robinson, were the tenuous but inspirational thread that tied together my activities in blues, gospel and soul with the local African American community. I have seen the healing powers of music bring the races closer together, and Rev. Rouse was a cornerstone to my ongoing efforts to facilitate those connections.

In the early ’90s before my wife Shelly and I started the Northeast Blues Society, Rev. Rouse performed a gospel set at Takin’ It to the Streets, a music festival we presented in Schenectady’s Central Park. Joan Osborne, who was also on the bill, was so moved by Rev. Rouse’s performance that she took her into a recording studio with the Holmes Brothers and recorded an album, A Change Will Come. This was years before “One of Us” established Joan Osborne as a hit maker with its question of what God would be like if he were just “a slob” like the rest of us.

The Northeast Blues Society presented acts that were color blind. My goal to this day is to facilitate a kind of musical nirvana that erases the fears we all have of people who are different than we are. Rev. Rouse did that as a minister, as a singer and as a confidant.

I remember taking her up to the Caffe Lena to perform. A fabled coffeehouse that was an early host to our latest Nobel Prize-winning poet Bob Dylan, Caffe Lena is a bastion of folk music, about as far removed from Rev. Rouse’s church as you could get. But Rev. Rouse walked into the Caffe and nailed a gospel performance that left those folkies speechless. And she did it a cappella.

When Joan Osborne played Proctors in November, 2015, Carla Page called me and asked if I could get Rev. Rouse back stage to say hi to Joan. It was one of those “my people will contact your people” situations, but thanks to a lot help from Joan’s publicist, Philip Morris at Proctors and Carla, it happened.

I’m comforted now that it did. Rev. Rouse was as close to Martin Luther King as I’ll ever get. He had a dream. Rev. Rouse helped make his dream a reality. I will miss her.

Funeral arrangements for Rev. Rouse are yet to be finalized at this time…