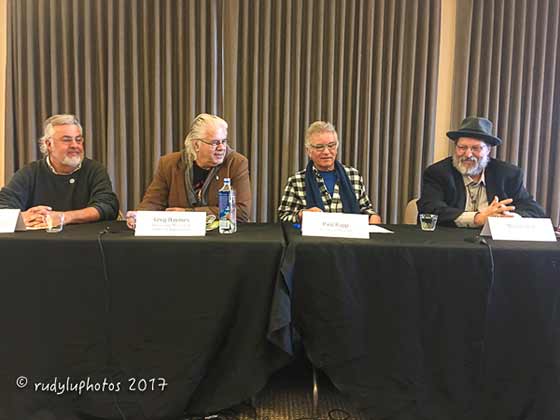 We aging baby boomers nostalgically remember the Greater Nippertown music scene of the 1970s-’80s as the golden era. In conjunction with their current exhibit, “Rock & Roll Icons: The Photography of Patrick Harbron,” last weekend the Albany Institute of History & Art hosted “Rock & Roll Replay,” a panel discussion about the Capital Region’s music scene of that time.

There was no real agenda for the forum, and there shouldn’t have been. Just fond memories of the music during that period and reminiscences of the old clubs where fans got the opportunity to see future superstars as struggling artists. The punk scene fueled many of these clubs, including such pioneering venues as the Hulla-Baloo, J.B. Scott’s and QE2. Can you imagine seeing the Police, U2 or Talking Heads playing in a small club with just a small audience? All of this was part of our music scene once upon a time.

Back then Saratoga Performing Arts Center hosted concerts that were literally wall-to-wall people, and the panel and audience members shared recollections of The Who (Who’s Next tour), Pink Floyd (Dark Side of the Moon) and risking life and limb to climb the fence to sneak into SPAC when the price of a lawn ticket was just $3.

Local 518 favorites Blotto received nationwide notoriety through a video that was made for a film class (“I Wanna Be a Lifeguard”) with a budget of $30 for a then-fledgling cable channel known as MTV. (Yes, they actually did broadcast music videos once upon a time.)

WQBK-FM ruled the airwaves with their “anything goes, we play everything, free-form music all in one show” that is now found only on college radio and even then generally in a more organized fashion. The DJs had close relationships with each other, their audience and the bands whose music they played.

Some non-local bands broke big only in the Local 518 and their own hometowns. For example, Root Boy Slim & the Sex Change Band, who had big pockets of popularity in Albany and Washington, DC, but hardly anywhere else. Many local music fans around town were in shock here when their record label dropped them due to lack of sales.

One primary reason that the scene began to shrink was the raising of the New York State drinking age from 18 to 21 back in 1985. The audience for live music began to dry up, and quickly disappeared altogether from the bars that catered primarily to college-age fans. Many of the bands of the area traced their break-ups to this period.

Of course, Greater Nippertown’s music scene certainly has not entirely died, but it is completely different now. There is now structure where there once were no rules. How will a future panel discussing our present music scene reminisce? We can surely wonder, but I am sure it will be with fondness and nostalgia.

A few of the concerts discussed at the panel: