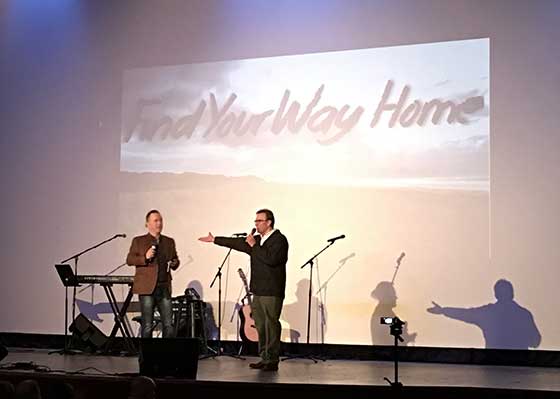 A video of Act One of the Irish-themed musical drama “Find Your Way Home” was screened at Albany’s Palace Theatre last Sunday (March 26), and the overwhelming reaction from the audience was please hurry and finish Act Two.

Act One was filmed during a workshop performance at the Civic Theatre in Dublin last November and included a cast of about 20 plus four musicians. The play is the result of a seven-year effort by Greater Nippertown musicians and writers Jimmy Kelly and Jeff Strange.

As the first act progresses, we are introduced to the inhabitants of a small Irish village whose way of life is threatened by the closing of the mill which is their economic foundation. We learn of the trials and tribulations in the family of Martin, the central character and widowed father of four, whose children are each struggling with life choices. Martin is conflicted about keeping his promise to his late wife. Should he keep the family together? Or should he find the best opportunities for his children now that the town is in decline?

Martin’s most difficult choice – and the central theme of the play – is arranging for his eldest son to move to America to be an apprentice engineer. Other conflicts include the decision by his second son to join the British army (against Martin’s vehement objections) and concern over the future of his oldest daughter, who is a plain homebody with no current romantic prospects.

The stories of each character are well developed, and the play is propelled by an excellent musical score that is contemporary while paying tribute to its Irish roots. The set-up in Act One leaves us all wondering what becomes of these characters who we have gotten to know and are now invested in learning how they fare in their future.

Jimmy Kelly and Jeff Strange have undertaken an immensely ambitious goal and are well on their way. Guys, please get Act Two finished right away!

The whole event at the Palace Theatre was a fundraiser for future productions and featured short performances from an all-star revue including the famous Irish tenor Ronan Tynan (who didn’t need a sound system to fill the theater), noted Irish-American tenor Andy Cooney, singer and cast member Alex Sharpe (formerly of Celtic Woman), the New McKrells, the Schenectady Pipe Band and students from the Farrell School of Irish Dance. The numerous politicians in attendance plus the large audience, filled about half of the lower level of the Palace, showing strong support for this effort from the community.