Songstress Teri Roiger celebrated the release of her new CD, Ghost of Yesterday: Shades of Lady Day, with a concert at the Senate Garage in uptown Kingston. Released on Dot Time Records, the album features songs about and recorded by the late great Billie Holiday, who would have been 102 years old this year.

In concert, Roiger featured songs primarily from her new release, although she did include selections from her previous recordings.

She was backed by an ace jazz quartet featuring John Menegon on bass, Wayne Hawkins on piano, Steve Williams on drums and Jay Collins on tenor and baritone saxophones, as well as flute.

The concert was part of the Jazzstock series curated by Teri and her husband John Menegon. While the majority of the Jazzstock concerts are held at the Senate Garage, the next offering – the return of jazz piano prodigy Joey Alexander and his trio – will take place at the Woodstock Playhouse at 7:30pm on Friday (April 21). Tickets are on sale now, priced at $40 & $60. 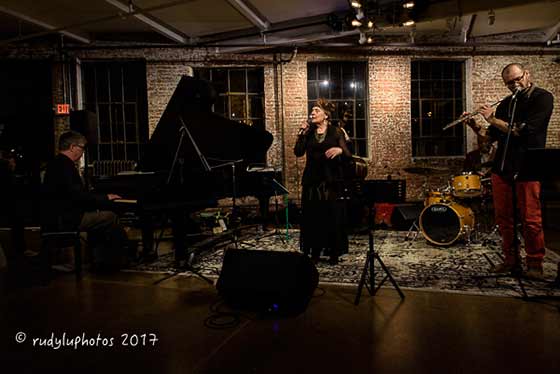