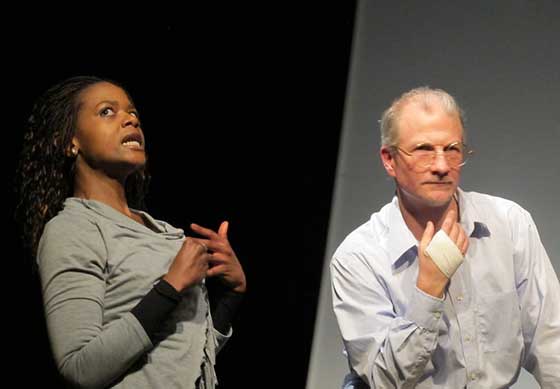 In 2015, according to playwright Kieron Barry, he “at last achieved the long-coveted triple: broken heart, nervous breakdown and midlife crisis.” How would he get through the various stages of grief after the woman he lived with for three years left him? Barry decided to keep a diary, writing down each new thought, which led him to the idea of writing a play about the trauma he suffered, and/or a play about writing a play about his grief.

In the course of the world premiere of The Official Adventures of Kieron and Jade at Catskill’s Bridge Street Theatre, we learn that the play began as a four-hour-and-40-minute oeuvre, which his unwilling director, having been threatened by Kieron with breach of contract if she did not direct it, was able to whittle down to a 90-minute intermission-less comedy.

It had to be a comedy, says Barry, because who would be interested in the misery he suffered unless the play provoked the laughter of recognition from an audience who had gone through similar breakups? “On paper, this is a play about self-harming, mental illness, even suicide. But as long as I can make a joke out of it, it will work.”

Born in Stratford-upon-Avon and currently residing in California, Barry has written several published plays, including Tomorrow in the Battle (performed at Stageworks/Hudson), Numbers (featured in Lucy Kerber’s book “100 Great Plays for Women”) and Stockwell (for which Barry was nominated for a London Evening Standard Theatre Award).

The Official Adventures of Kieron & Jade features two accomplished performers: Jason Guy, a talented, energetic, fast-talking British actor who portrays Kieron, and Bonita Jackson, who creates more than 15 different characters, according to director John Sowle. Jackson’s talent at transforming herself into multiple characters using various accents is a tour-de force, but it is not always easy to tell them apart.

The most puzzling aspect of having only two performers, no matter how enjoyable it is to see good actors at the top of their game, is that we expect and look forward to seeing the other title character – the American singer/songwriter Jade — but it rarely happens. This leaves us to wonder whether we missed her among the other characters, and if not, why the playwright has chosen to sideline her. We do see Jade in videos and photographs projected onto a lopsided screen upstage — are these projections the real people or the actors?

Kudos to John Sowle for his visual imagery and for the amazingly inventive set — a long, triangular piece that spans the width of the stage, with a steep incline on the top (another skewed angle), along which the actors can sit, stand and lie down. Behind the incline are two small boxes that can be pulled up as seats for the actors, as well as a tennis net, and below the incline is a wall facing us with multiple doors that contain props used during the play.

A FEW MINUTES WITH… Tom Rush