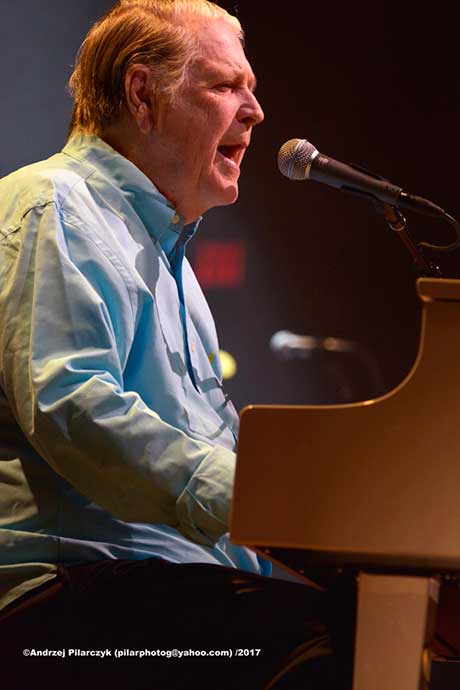 Brian Wilson’s concert at the Palace Theatre last month was pretty close to an unqualified triumph, presenting highlights from the Beach Boys’ catalog not as mere nostalgia but as songs that can be brought to life in the here and now, capable of summoning powerful emotions and forging brand new bonds. You’d need a heart of stone to resist Wilson’s gorgeous arrangement of “Don’t Worry Baby,” and if that first set standout somehow didn’t get to you “Don’t Talk (Put Your Head on My Shoulder)” certainly would.

With backing from a ten-piece orchestra, augmented to 11 when ex-Beach Boy guitarist/singer Blondie Chaplin joined the ensemble, Wilson’s primary contribution to the evening was as a composer. Sure, he sang lead on a few tracks and played piano throughout, sometimes anchoring the lavish arrangements. But there were three more accomplished vocalists onstage – Chaplin, longtime sidekick Al Jardine and his son Matt – and frankly part of Wilson’s genius is his willingness to share the spotlight. Wilson’s limited role onstage shouldn’t have surprised anyone possessing more than a passing familiarity with the Beach Boys.

The ensemble’s importance was established at the start, with eight-piece harmonies giving “California Girls” an appealing sheen that rivalled the immaculate studio version. Even though he was using a big band, Wilson wisely kept the flavor and economy of his original arrangements, so the guitar solo on “I Get Around” was a pithy tease. Al Jardine sang “Shut Down” and “Little Deuce Coupe” with authority. Wilson’s voice isn’t as supple as it used to be, but he retains an appealing yelp well-suited to the yearning expressed in “Little Honda.”

Musical director Paul Von Mertens played an important part in making the evening such a success, contributing sax solos to “Help Me Rhonda” and “Wild Honey” and lovely flute parts to “Add Some Music to Your Day” and the aforementioned “Don’t Talk (Put Your Head On My Shoulder).” Probyn Gregory deserves mention as well, putting down his guitar to add trumpet flourishes to “Let’s Go Away for Awhile” and French horn to “God Only Knows.”

Blondie Chaplin more or less hijacked Wilson’s lushly-orchestrated show when he unleashed some dazzling guitar excursions towards the end of the first set, on “Wild Honey” and the subsequent “Sail On, Sailor.” It was a little jarring, as if Jimi Hendrix had joined the Mamas & the Papas mid-stream, but served to inject a welcome dose of rock into an evening that had been tending towards middle-of-the-road pop.

The second set was devoted to the landmark Beach Boys LP Pet Sounds. Matt Jardine tackled the falsetto vocals on “Wouldn’t It Be Nice” with aplomb, then traded lines with Wilson on “You Still Believe in Me.” “God Only Knows” earned a thunderous standing ovation, while guitarist Nicky “Wonder” Walusko got a rare chance to shine on the title track.

By this point Wilson had the entire audience eating out of his hand, and if the first four songs of the encore seemed a bit rushed, perilously close to an oldies revue, no one else seemed to notice. The closing “Love and Mercy” was just sublime, and served to remind everyone that Wilson’s catalog has much to offer aside from the Beach Boys classics. That said, it was one of those oldies that ran through my head for the rest of a memorable night:

BRIAN WILSON SET LIST
California Girls
Dance, Dance, Dance
I Get Around
Shut Down
Little Deuce Coupe
Little Honda
Help Me, Rhonda
You’re So Good to Me
Surfer Girl
Wake the World
Add Some Music to Your Day
California Saga: California
Don’t Worry Baby
Let Him Run Wild
Feel Flows
Wild Honey
Sail On, Sailor
INTERMISSION
(Pet Sounds)
Wouldn’t It Be Nice
You Still Believe in Me
That’s Not Me
Don’t Talk (Put Your Head on My Shoulder)
I’m Waiting for the Day
Let’s Go Away for Awhile
Sloop John B
God Only Knows
I Know there’s an Answer
Here Today
I Just Wasn’t Made for These Times
Pet Sounds
Caroline, No
ENCORES
Good Vibrations
Barbara Ann
Surfin’ U.S.A.
Fun, Fun, Fun
Love and Mercy

SECOND OPINIONS:
Michael Hochanadel’s review at The Daily Gazette
Excerpt from Jim Shahen Jr.’s review at The Times Union: “Wilson’s Palace show was another stop in a two-year tour taking a victory lap to retire his masterwork ‘Pet Sounds’ by playing it in its entirety, but it was more than that. It showed that the legendary Wilson, seemingly little more than an on-stage prop in the not-too-distant past, is actively engaged in and deeply proud of the body of work he created more than 50 years ago. After being guided to his piano by a handler, it seemed like an infirm Wilson might simply be a presence on the stage. Instead, he greeted the audience warmly and proceeded to sing lead vocals on roughly half of the Beach Boys hits, songs he didn’t sing originally.” 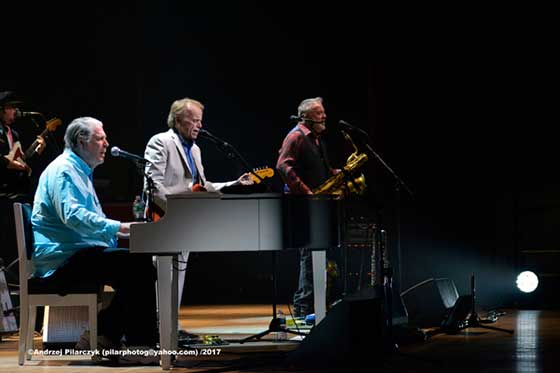 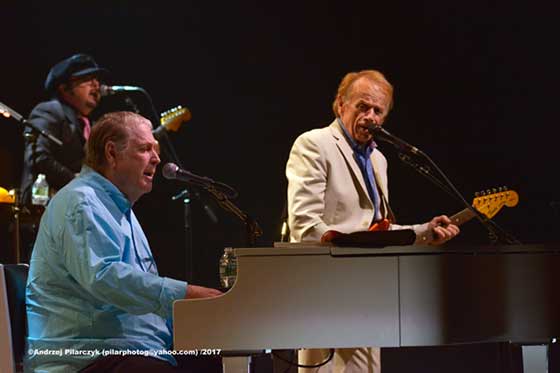 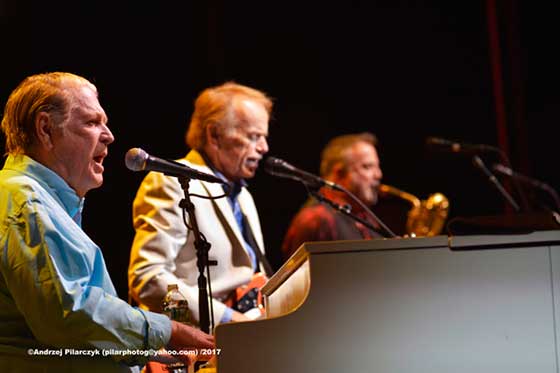