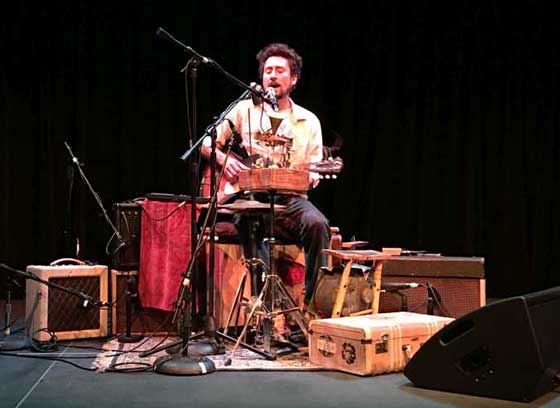 During the fingerpicking showcase, “End of the Day,” the Suitcase Junket (aka, Matt Lorenz) sang, “The trash that we throw away is the same as the trash we keep.” But it would seem as though Lorenz doesn’t throw much away.

In fact, he seeks out the discarded, like the guitar that he found in a dumpster at his alma mater, Hampshire University. That same guitar – somewhat battered and patched with a piece of a washboard – was his primary instrument during his recent Albany debut at The Linda last weekend.

“Buy a new instrument?” he asked only semi-rhetorically. “Nah, I’m pretty sure I’ll just find one.”

On stage, he was surrounded by an array of repurposed junkyard reclaimations – a suitcase that served double duty as a bass drum and a drum throne; a baby shoe beater against an old gas can serving as a snare; a circular sawblade; a box of bones, bottlecaps and silverware, along with a couple of recognizable instruments like a hi-hat and a toy keyboard.

Bringing a whole new meaning to “upcycled,” he played them all like a thrift-shop virtuoso, creating a sublimely clattering cacophony. But ultimately it wasn’t the novelty of a one-man band conjuring music from a heap of trash that made Lorenz’s performance so captivating.

Rather it was the sublime craft of his songs – a far-flung collection that resonated with influences ranging from Mississippi John Hurt (the fingerpicking folk-blues of “Busted Gut”) to Chuck Berry (the rambunctious, loose-limbed chugger “Jackie”), from early Little Feat (the country-funk of “Swamp Chicken”) to AC/DC (“Evangeline,” awash in heavy metal distortion).

During his 80-minute show, he veered from slash-and-burn old-school slide guitar blues (the Chris Whitley-like distorto-drone of “What Was I Gonna Say”) to the country lament “Red Flannel Rose” (performed as his encore with just his junkyard guitar and no PA system). Earworm songs like “Beta Star,” “Mountain of Mind” and the sing-along “Wherever I Wake Up” proved that he knows his way around contemporary pop hooks, too.

And, of yeah, did I mention that he injected some primo Tuvan throat-singing into a number of his songs?

You’ve got more chances to catch the Suitcase Junket in action… He’s playing at Club Helsinki in Hudson on Saturday, June 3, and he’s also scheduled for upcoming appearances at Clearwater’s Great Hudson River Revival in Croton-on-Hudson and FreshGrass at MASS MoCA in North Adams. And I have a feeling that he’ll be poppin’ up at a few other venues in the upcoming months, too.

THE SUITCASE JUNKET SET LIST
New Old Friend
Earth Apple
Never Leave, Let Me Be
???
The Next Act
Busted Gut
Jackie
Ten Rivers
Evangeline
What Was I Gonna Say
Swamp Chicken
Why So Brief
Beta Star
End of the Day
Seed Your Dreams
Mountain of Mind
Wherever I Wake Up
ENCORE
Red Flannel Rose 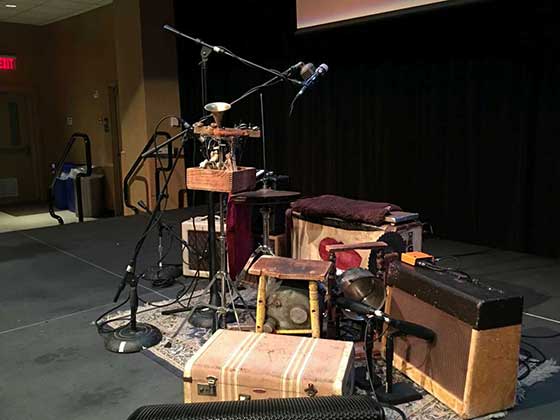 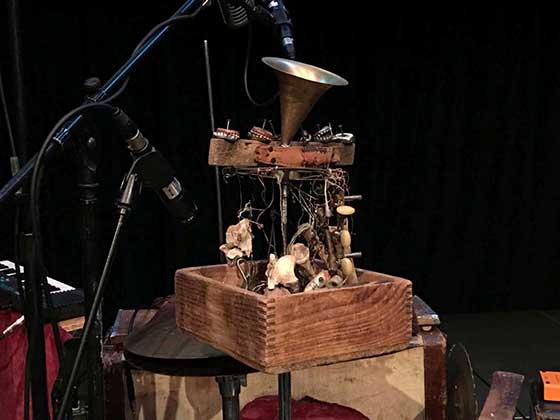 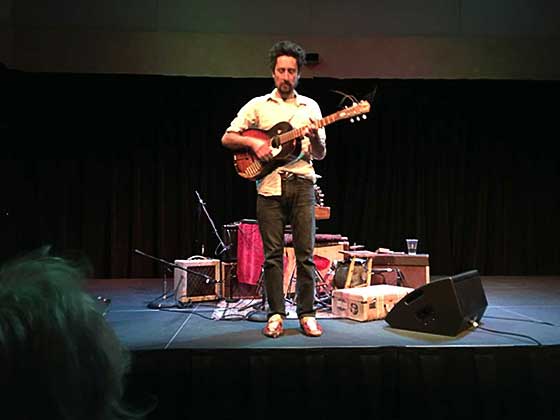