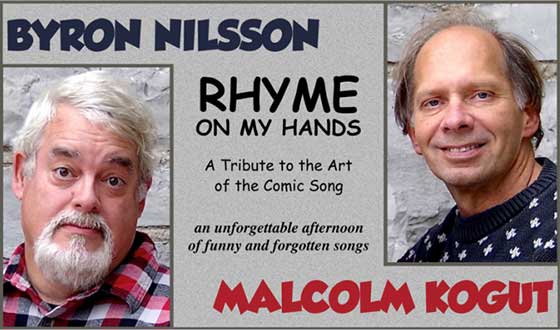 The third in the Fort Salem Theater’s series of Sunday Afternoon Cabarets comes to the Washington County venue at 2pm on Sunday (May 21), when humorist Byron Nilsson takes the stage with his intimate, one-man program of funny and forgotten pieces, “Rhyme on My Hands: A Tribute to the Comic Song.”

Nilsson is an actor and writer who appeared in several musicals at the New York State Theatre Institute and was featured in two episodes of Law and Order. As a playwright, he has been produced at the New York Fringe Festival and the Ensemble Studio Theatre. A former chef, he served for 30 years as restaurant critic for Albany’s alternative newspaper, Metroland, and now writes for The Alt. In his spare time, he keeps bees and grows garlic and San Marzano tomatoes on his small Montgomery County farm.