Anyone who thinks progressive rock is dead clearly hasn’t spent much time at The Egg this month. Two Fridays ago guitarist Adrian Belew and his Power Trio thrilled a packed house at the Swyer Theatre, and last Saturday powerhouse drummer Carl Palmer earned a rapturous reception at the same venue.

There were some interesting parallels between the two performances. Despite favoring a genre known for bombast and excess, both Belew and Palmer are touring in a relatively Spartan trio format. As a logical consequence, both shows featured the drummer right up front – physically in terms of stage placement, and musically with arrangements that featured two exceptional players.

Remarkable as well were all the smiles onstage, a sense of playfulness at odds with prog’s po-faced image manifested when Belew tried to bait his drummer Tobias Ralph into a false start, seen again when Palmer flashed an approving grin at Simon Fitzpatrick after the latter executed a particularly tricky run on his Chapman Stick.

The Crimson covers in fact proved to be the most accessible material in Belew’s performance. King Crimson bassist (and Hudson Valley resident) Tony Levin was in the audience, so Belew dedicated a lilting rendition of “Frame by Frame” to his former comrade. It was fascinating to see how Ralph reinterpreted Bill Bruford’s original drum parts on “Heartbeat,” “Three of a Perfect Pair” and “Elephant Talk.”

The trio also paid homage to another former Belew colleague (circa Stage and Lodger) with a spirited romp through David Bowie’s “Boys Keep Swinging,” bassist Julie Slick (who some thought stole the show) clearly enjoying the slightly off-kilter bassline.

While the set also boasted many highlights from Belew’s lengthy solo career, he tended to use his own material as groundwork for lengthy instrumental excursions, sometimes to good effect but at others (“Big Electric Cat,” for instance) shortchanging the actual composition. No matter, the crowd lapped all of it up thirstily, offering a lengthy standing ovation after “Thela Hun Ginjeeet.” “This is a night I’ll never forget,” said an obviously moved Belew.

Carl Palmer’s silver Ludwig drum kit with Paiste cymbals was placed front and center for his galvanizing performance at the Swyer last Saturday. Flanked by Paul Bielatowicz on guitar and Simon Fitzpatrick (billed in the program as a bassist) on six-string when not fondling a Chapman Stick, a remarkably fit-looking Palmer offered a wide-ranging set.

The bulk of the show was devoted to songs associated with ELP’s initial run of success in the early ’70s, originals such as “Trilogy,” “Take a Pebble” and “Lucky Man” sitting quite comfortably alongside Bela Bartok’s “The Barbarian,” Modest Mussorgsky’s “Pictures at an Exhibition” and Aaron Copeland’s “Fanfare for the Common Man.” Palmer treated the audience to a mesmerizing drum solo at the conclusion of “Common Man” before his two colleagues rejoined him for a closing romp through Kim Fowley’s arrangement of Tchaikovsky’s “Nut Rocker.” 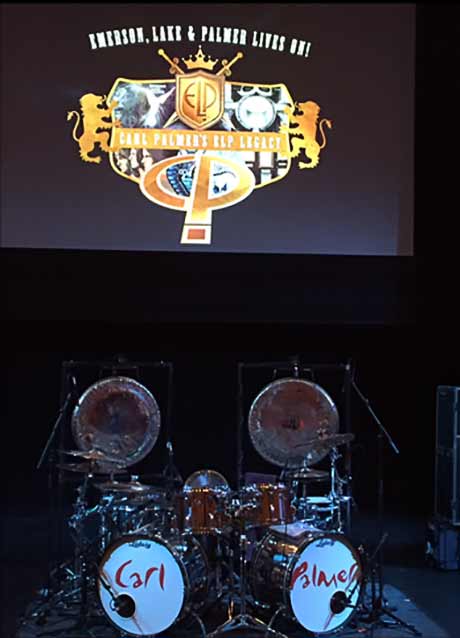