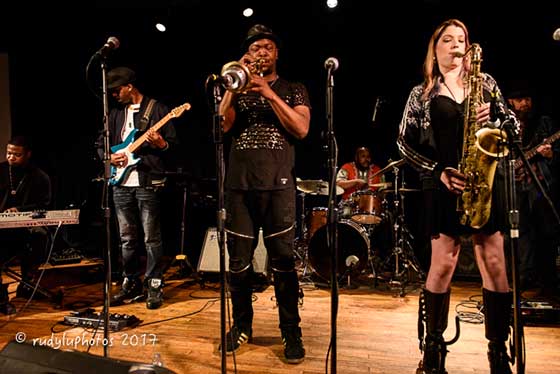 Review and photographers by Rudy Lu

In his youth, hornman Maurice “Mobetta” Brown was the winner of the 2001 National Miles Davis Trumpet Competition, and since then, he’s been associated with a variety of styles of music.

He was a member of the Tedeschi Trucks Band and was the arranger of their horn section for their debut album Revelator that won the Grammy Award for Best Blues Album in 2012. His solo projects are a fusion of jazz and hip-hop with old school R&B, and that’s what he played at The Falcon in Marlboro earlier this month to kick off the tour in support of his latest CD, The Mood.

The classic jazz front line of trumpet and saxophone – featuring Chelsea Barata on tenor saxophone served up the melodies and inflections with their horns as well as doing a fair amount of rapping.

Brown was quite the showman, frequently dancing on and off the stage, twirling his trumpet. His playing frequently dipped into the lower registers. And he proved to be the master of the mute – both by hand and with a Harmon mute.

The rest of the band provided highly danceable, righteously rhythmic accompaniment. Drummer Joe Blaxx and bassist Stu Mahan were definitely in the pocket.

Chad Salph on keyboards provided the color both on the B3 and the piano. Marcus Marchado provided the classic funky r&b jazzy Wes Montgomery-inflected chords, and when he was given a chance to stretch out, he made the most of it.

Most of the music played was from The Mood, the music varying from slow jams such as the instrumental “Intimate Transitions” and the sunny summertime song ”It’s a New Day” from 2004. More complex rhythms were explored with “Morrocan Dance Hall”; imagine being in Morroco dancing to the sound of a bugle’s blare and complex, multiple percussion rhtythms. The influence of Chick Corea was clearly heard here.

Although, the band played a bit loud for the room, and the room was far from full, this was a great evening for those who enjoy the jazz spiked with hip-hop and R&B.