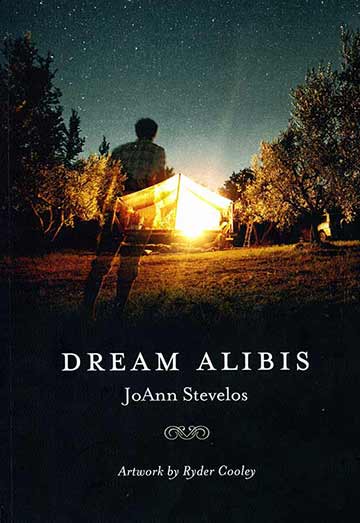 Children learn the history of their families through stories, told over and over: “That’s how your parents met.” “That’s how we lost the house.” “That’s why I left your dad.” But as time passes and the child grows up, the stories inevitably become more nuanced, as the child detective gains both more details and and better insight into human motives. Perspectives shift and actions acquire more gradations. JoAnn Stevelos’ new book Dream Alibis delves into this phenomenon in a subtle journey that explores the bonds that both unite and divide families.

In the prologue, she lays out her themes – dreams as an alternative to reality and alibis as a skirting of guilt – and then launches into 13 short poems, illustrated by Ryder Cooley’s plaintive drawings, that fearlessly examine tiny junctures of grief and self-deception, now viewed from a wiser, more mature distance. Stevelos has a knack for distilling these crystalline moments of loss, sometimes surreal, sometimes achingly straight forward.

“Walk Along the Edges” is a dream-like telling of a pregnancy and birth, complete with squabbling siblings, a shirking lover and red pine trees as a supporting character. In “Bells,” a breezy account of a rainy day spent looking at old photographs abruptly comes to a rueful conclusion:

Bells ringing so loud
that I will never believe
you can’t hear them too.

The short poems in the first half of the book set the stage for the second half: “Little Red Wagon,” a play told in a series of vignettes that focus on the secrets that families keep through misinterpretation, pride and shame. Lucy is a young woman approaching her 20th birthday. Her grandfather Ezra and father Walter debate whether to give her a letter from her mother, Attie, who committed suicide some time ago, but left the letter to be given to Lucy on that day. Their arguments and recriminations reveal a large gulf between their respective memories of Attie, both as a political activist and as a loving mother. The play is written with two alternative endings that reveal different motives for the suicide, both completely plausible, reinforcing Stevelos’s theme that another person’s inner world is ultimately unknowable.