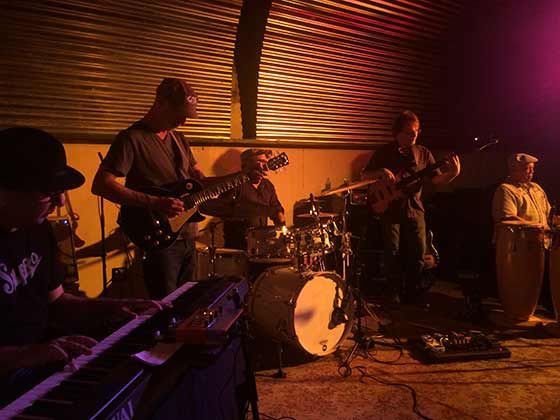 Is it rock? Is it jazz? Is it something that dwells in the vast expanse inbetween? More importantly, does it matter where you try to shoehorn in the exciting, adventurous sound of Nelson Esposito Quintana (NEQ, for short)?

The instrumental trio – featuring guitarist Todd Nelson, bassist Kyle Esposito and drummer Manuel Quintana – has been criss-crossing musical genre boundaries for several years now, and they upped the ante considerably last month by expanding to a quintet with the additions of keyboardist Mike Kelley and constantly-in-motion percussionist Carlos Valdez.

Making their five-piece debut at the Hangar on the Hudson in Troy, the band delved deeper into percolating Latin rhythms, but in truth they would seem to find their biggest audience on the wide-open jam band scene, as the quintet uncoiled an evening of sparkling, often spectacular musicianship, a constant stream of thoroughly unexpected left-hand turns onto the road less taken and an undeniable beat to keep the dance floor hopping.

They opened with a simply shimmering rendition of Jimmy Webb’s magnificent “Wichita Lineman,” before flexing their muscles with a sprawling but taut medley of Spirit’s “Fresh Garbage,” Tito Puente’s “Oye Como Va” and John McLaughlin’s “Marbles.”

From there, it was a free-thinking grab-bag of tunes, dipping into Bob Marley, Traffic, Dizzy Gillespie, the Beatles, a spacey dub-reggae treatment of Neil Young’s “Like a Hurricane” spiked by Kelley with a detour through Del Shannon’s “Runaway”), vintage movie soundtracks (Ernest Gold’s theme from 1960’s “Exodus”) and even classical music (a spicey interpretation of the second movement of Joaquín Rodrigo’s “Concierto de Aranjuez”).

NEQ’s original tunes were just as in-the-pocket, especially the title track of their 2015 album None of the Above, highlighted by a dynamic duel between Quintana and Valdez.

Opening the evening was Average Bear, a new combo led by guitarist-vocalist Mike McMann and saxman Luke McNamee with drummer Jason Maloney and, doing double-duty, bassist Esposito. And their repertoire was nearly as eclectic – interspersing their originals with a setlist that shifted from Merle Haggard to the Grateful Dead, from Paul Simon to Jeff Beck. And from way out in left field McNamee led the band though a slinky dead-on version of the old Perez Prado chestnut “Cherry Pink (and Apple Blossom White).”

UPCOMING: NEQ brings their expanded line-up to McGeary’s Pub in Albany for a free show at 7:30pm on Saturday (July 8). Average Bear returns to the stage for a 4pm show at Lyons Lake in Nassau on Sunday, July 23.