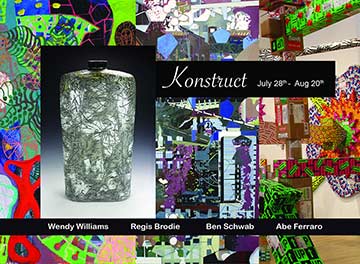 Ellsworth Kelly @ The Hyde Collection, Glens Falls. Two companion exhibitions: Ellsworth Kelly: Slow Curve, which includes seventy prints that examine the artist’s experimentation with curved fields of color, and Ellsworth Kelly: Fruits & Flowers, twenty-six lithographs that reveal the sources of Kelly’s non-rectilinear shapes. (Through September 17)The Coffins of Paa Joe and the Pursuit of Happiness @ The School, Kinderhook. A large-scale exhibition that honors the Ghanaian legacy of abebuu adekai, or fantasy coffins, that celebrate death and the afterlife, sculpted in the form of objects representative of the deceased and their interests. In 2004, Claude Simard, the late co-founder of Jack Shainman Gallery, commissioned thirteen coffins in the form of European castles erected along the Gold Coast in the 15th century, which served as holding pens for America-bound slaves.

New Shows Announced for the Mahaiwe