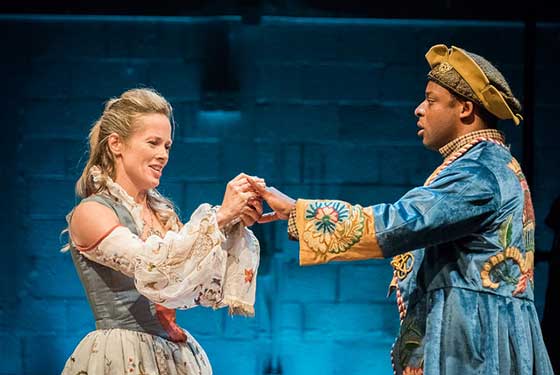 Congratulations to Tina Packer and her supremely talented and versatile cast and crew on their gorgeous production of Cymbeline at Shakespeare & Company in Lenox! We are transported back to the early glory days of the company, outdoors at the Mount, when performers surrounded the audience as they brought to life the wondrous magic of theater.

Cymbeline was, until now, the only one of Shakespeare’s 37 plays Packer had not directed. Written in 1609, one of the last in the canon, the play is rarely produced, possibly because it is so difficult to mount, combining disparate elements, themes and plots from the playwright’s earlier works. It features more than 30 characters and comprises a mix of comedy and tragedy that defies classification.

Helped by judicious cutting, nine chameleon-like actors and a dazzling array of costume designs (bravo Tyler Kinney!), Packer bravely sets this play on a nearly empty stage with a few ladders, traps and a bed (Kris Stone is the scenic designer). From the opening of the play, during which the actors appear in “neutral” Shakespearean garb to provide introduction, exposition and explanations (this device is used in some transitions as well), we are thrust into an ever-evolving, fast-paced world. Every actor portrays several characters, often changing costume in full view of the audience, either upstage with the aid of clothing racks (the inner stage) or downstage in mid-sentence. Splendid work by black-clothed assistants, who, like Japanese stagehands, suddenly appear and undress/dress the actors without interrupting the action!