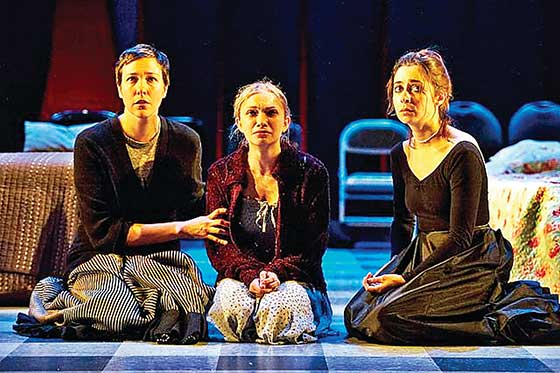 Anton Chekhov’s The Three Sisters is recognized as one of the modern theater’s greatest plays. First produced in 1901, this story of loneliness, disillusionment and its challenging roles continue to attract actors and directors all through the western world. A revised version, Moscow Moscow Moscow Moscow Moscow Moscow by Halley Feiffer is currently on the Nikos Stage at the Williamstown Theatre Festival.

Olga, Masha and Irina, along with their brother Andrey, live in a small town miles away from their original home in Moscow. The family moved eleven years ago when Andrey’s military battalion was transferred. Despising the pedestrian lives they now lead, the sisters long to return to the familiarity and color of the city. Olga, the eldest and stricken with migraine headaches, is dissatisfied with her life as a school teacher. Masha, seven years married to dull and prosaic Kulygin, has an affair with Vershinin, a lieutenant-commander in the military stationed in the town. Irina, at 20 years of age, is still child-like not having fully experienced the sophistication of the faraway city. Andrey, the presumed intellectual of the family, is smitten with Natasha, a young woman of very dubious reputation and who is hated by the sisters.

The tone of the original play is dark and grim. Feiffer said in an interview “… I don’t think I’ve seen any production that I felt successfully captured the absurdist humor of these characters and the profound depths of their self-made tragedies.” Moscow… satisfies both ends of her statement.

A FEW MINUTES WITH… Rhiannon Giddens