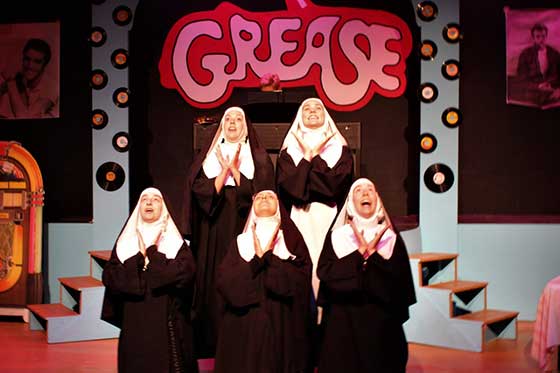 As a theater critic I am required to roll my eyes when a Nunsense show (there are nearly 10 of them) is mentioned. The first iteration, currently playing at the Theater Barn in New Lebanon, is 32 years old, and its age is beginning to show. But I still secretly relish the opportunities these shows provide for talented actresses who are no longer ingénues to strut their stuff.

If you have managed to avoid the Nunsense franchise until now, I will give you a quick synopsis. Dozens of members of the Little Sisters of Hobken, housed at Mount Saint Helen’s Convent, have died as a result of some bad Vichyssoise concocted by their convent cook, Sr. Julia Child of God. The remaining sisters have managed to bury all but four of their late comrades (they are stashed in the freezer and a visit from the health inspector is looming), but the sisters have run out of money so they decide to put on a variety show to raise the necessary cash.

They are backed by musical director Alan Schlichting on piano, Ian Tucksmith on drums and Adam Peterson on bass. All three musicians are wearing the collar and kibbutz gently with the cast on several occasions.