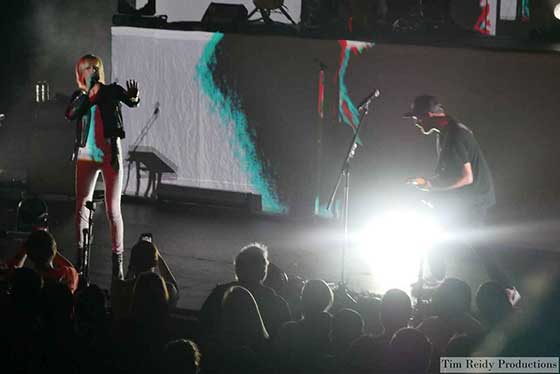 Phantogram’s sold-out packed-to-the-rafters performance at The Egg’s Hart Theatre late last month was a state-of-the-art pop concert to be sure, but it was also something more. The band’s music possesses its own epic grandeur which was amplified by the circumstances of this gig, a triumphant homecoming marred only by one tragic absence.

The band’s core duo – Sarah Barthel on guitar, piano, synthesizers and vocals; Josh Carter on guitar, synths and vocals – started a band called Charlie Everywhere in Greenwich 10 years ago. Since then they’ve released three widely-acclaimed albums, collaborated with Big Boi from OutKast, opened for Alt-J at Madison Square Garden and performed at countless major festivals, including Bonnaroo, Coachella and Lollapalooza.

For touring purposes the band’s sound is fleshed out by Nicholas Shelestak on guitar and synth and Chris Carhart on drums and samples. The staging for the current outing has this duo perched on scaffolding above and behind Barthel and Carter. The lighting was mostly stark white with lots of strobe early on, conjuring a minimalist vibe not dissimilar to David Bowie’s 1976 Isolar tour.

Perhaps the most striking effect was first used during “Run Run Blood” when a live camera feed of the band was projected over the entire tableau. Going blonde has not impaired Barthel’s hair-tossing prowess. While their music combines the best elements of electronica and so-called dream pop, there was no shoegazing here: Phantogram stalk the stage like rock stars.

Although their set was comprised mostly of tracks from the year-old Three, Phantogram performed a sparkling version of “Mouthful of Diamonds” from 2009’s Eyelid Movies, “Don’t Move” from 2011’s Nightlife EP and three highlights from 2014’s Voices – “Black Out Days,” “Bad Dreams” and “Howling at the Moon.”

There’s a simple dedication printed on all copies of Three: “For Becky.” Barthel’s sister Rebecca killed herself on January 16, 2016, while Phantogram was in the midst of making the record. Most of the crowd were aware of this tragedy, and everyone fell silent as Barthel announced that $1 from every ticket sold on the tour was being donated to the American Foundation for Suicide Prevention.

“After a year-and-a-half I’m finally able to talk about it without crying,” confided Barthel. “It’s totally okay to not be okay. This world is fucking hard, and life is hard, and life is really beautiful as well.” Simple words perhaps, but they seemed brave and wise as Barthel uttered them in front of close to a thousand family members, friends and strangers.

After that catharsis Phantogram finished with a couple of gems from Three. “Cruel World” was far more passionate and intense than the album version.

I’m putting you out of your misery
‘Cause darling you’re dragging me down
I wish I could say I’m sorry
But I’m over that, now I’m taking you out
It’s a cruel, cruel world

A title like “You Don’t Get Me High Anymore” seems like an odd way to end a set, but the chorus is so indelible that some people leaving the show were still singing it, as if it was a happy song rather than something of a downer. And there’s something apt about that…

Opening act She-Devils was a tough pill to swallow, and they’d likely be flattered by that phrase. Singer (not sure that’s the right word really) Audrey Ann Boucher usually croons dispassionately, a bit like Nico, but occasionally she gets worked up over something and cuts loose with a hint of emotion, while Kyle Jukka stands stock-still regardless and fiddles with his electronic bag of tricks. Although they’re a duo they don’t really sound much like Suicide: think instead Cosey (from Throbbing Gristle) singing with Cabaret Voltaire, or a less-naughty version of Whitehouse. 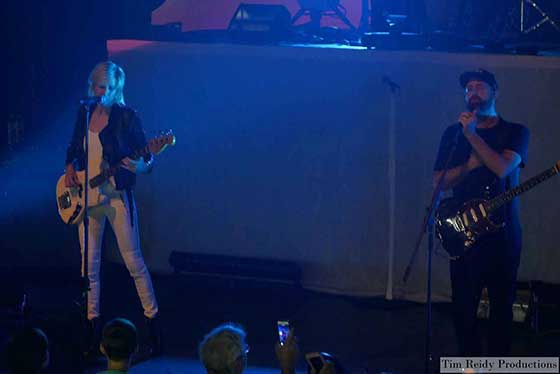 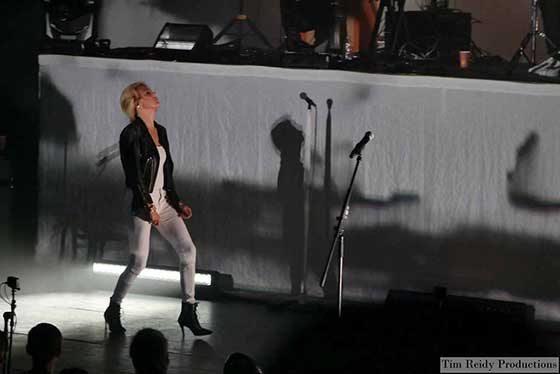 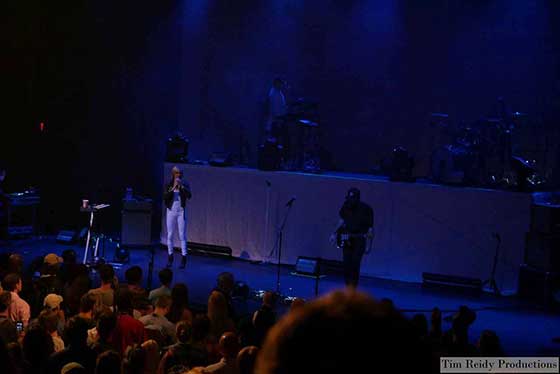 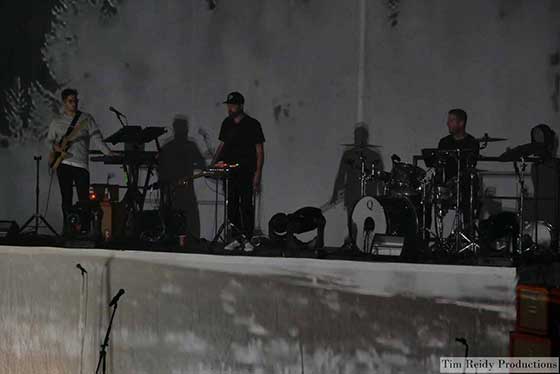