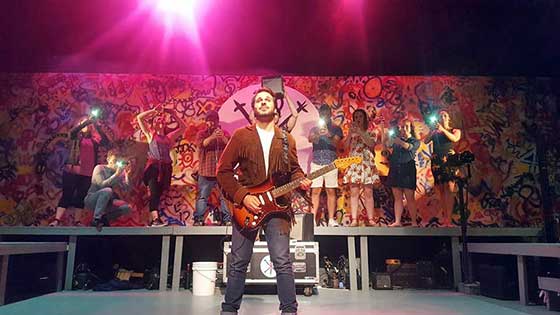 Godspell is a show of my youth, and it has been scientifically proven that music you listen to during your adolescence holds a special meaning for you all your life. But while I still know all the songs by heart, it has been nearly 20 years since I have seen a production, and the show in its entirety is still stunning in its simplicity and powerful message. Seeing it the day after the tragedy in Charlottesville, Virginia, was a deeply emotional and spiritually moving experience.

“Godspell” is an older spelling of the word gospel, which means “good news.” It is based on the Gospel According to Matthew, with bits of Luke’s gospel thrown in for good measure. The librettist, John-Michael Tebelak, who created the show for his Master’s thesis project at Carnegie Mellon, had contemplated pursuing ordination. Many of the lyrics not written by composer Stephen Schwartz are taken from hymns or even older liturgical sources – “Day by Day” contains writing by the 13th-century English bishop Saint Richard of Chichester. The central character is Jesus of Nazareth, so there is no getting around the fact that Godspell is a Christian show, but the good news embodied in it is so deeply rooted in justice and peace that it transcends any one religion. All the world religions embrace the message of this show, which is about unity, not division.

At New Lebanon’s Theater Barn, director and choreographer Trey Compton has assembled the perfect cast for this show – ten remarkably talented young men and women – who he has formed into a cohesive team. Each actor plays at least one instrument over the course of the show, after the a cappella prologue “Tower of Babble” because, in Compton’s words: “Jesus physically brings the music with him,” transmitting his message of love and acceptance through music.