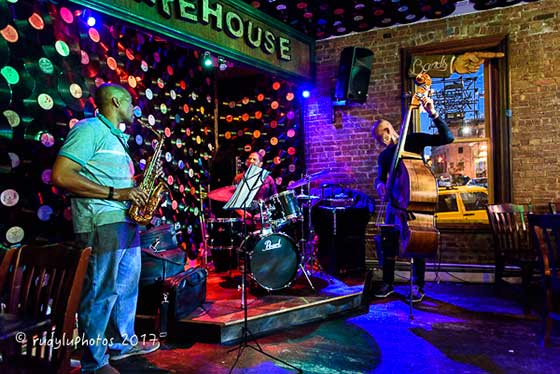 I almost missed The Wherehouse as I drove down Liberty Street in Newburgh, but the full-size trapeze sitting in the park across the street from the club might have distracted me a bit. (No joke, no ‘70s flashback: Someone was running a camp of some kind, I was told. At night, Christmas lights light up the structure.) You might have missed the corner establishment, too, and even if you hadn’t, you might have hit the “Abort” switch anyway after seeing the vinyl records affixed to the walls and ceiling, the Foghat album blasting on the sound system, and the local roller-derby team bellied up to the bar.

Whatever your reasoning, taking a pass on this joint would have been a major mistake on your part. Situated one block above the kind-of-waterfront gentrification project we’ve seen in Troy and Cohoes, the Wherehouse is the kind of joint Guy Fieri lionizes on “Diners, Drive-Ins & Dives:” an ostensible hole-in-the-wall where people with beards and tattoos put out tremendous, tasty food every day for its legion of customers, most of whom were packed into the two dining rooms in the back during my visit. We’re talking a two-page menu for beers on tap (including some damn good local selections), a burger menu that makes Red Robin look like Mickey D’s, homemade chili that kisses you while it kills you, and a vegetarian/vegan menu you’ll be hard pressed to duplicate anywhere in Greater Nippertown. If I were a local, I’d be on first-name terms with the bartenders in nothing flat.

On this night, however, the message The Wherehouse should have posted outside was, “Come for the food! Stay for the jazz!” This was the third Saturday of the month, which meant the Eric Person Trio would be plying its trade for two killer sets. I’d seen the dynamic alto player on the Fourth of July weekend across the river at Quinn’s in Beacon, leading a quartet that also featured Person Trio drummer Tony Jefferson, and my neck was still sore from the multiple times that group spun my head like a top. Person would only have Jefferson and rock-steady bassman Ira Coleman backing him up at The Wherehouse, which was just fine. Jefferson’s kit literally took up all the entirety of the postage-stamp-sized stage, forcing Person and Coleman to set up shop on the chipped hardwood dance floor.

There were also no microphones on this night, which was perfect for The Wherehouse’s small performance space. In any case, you would have been able to hear Person from two blocks away as he dug deeper and deeper into the opening “Beer Blues.” He was blowing up right from the jump, with Coleman keeping the foundation straight and strong while Jefferson stuck and filled at will. From there, they all jumped on “Star Eyes,” a ‘40s-era standard made massive by Charlie Parker’s 1953 Verve recording. This was jazz cut down to the bone, with no fat or gristle anywhere in sight. As cutthroat as Person was a couple of weeks earlier, he was slashing up The Wherehouse with the greatest of ease. He eased up slightly for a smoky take on the Ira Gershwin/Vernon Duke classic “I Can’t Get Started,” but the rest was razor-sharp whether it was blues, bossa, or straight-up blowing.

With no other “standard” foils for Person to fall back on, the rhythm section had to carry a significant part of the lyrical load, but both members were more than up to the task. Coleman was playing a cut-down bass, but the amp he brought easily displayed how rich and full he could get. Every solo was deep and sweet, especially on “Blue Bossa,” where Person laid out while Jefferson tapped out rhythmic Morse code on one of his crash cymbals. Jefferson is a damn good lyricist in his own right, so when he wasn’t following Person’s lead as far as raising or lowering the intensity level, Jefferson rolled like a big wheel over and under Coleman’s adamantine foundation.

I’ve equated playing sax-trio jazz with setting yourself on fire and composing Shakespeare-quality soliloquies while juggling penguins during a command performance for the Queen of England. As far as Person and his partners were concerned, it was just another day at the office. This was particularly evident during their rendition of “All Blues,” my all-time favorite Miles Davis track. If you’re familiar with the original recording, you know it’s a study in layers, each one painted delicately and seamlessly by one of the genre’s most legendary groups. While the piece’s famous harmonies may have been missing here, the passion of the piece more than doubled without losing its iconic shape. As in-your-face as Person got, he never lost respect for the cool of the composition.

Several times during this evening, I wanted to run back to the dining rooms and yell, “Do you people know what you’re missing?? Put down the cutlery and get your asses out here!” Like I said, though, Person’s music is not background music: It reverberates through all boundaries, both physical and spiritual. While I and the rest of the bar patrons had a blast watching this group work, I’ve no doubt the dining crowd got a healthy dose of real, uncut jazz to go with some of the best pub grub in the Hudson Valley. 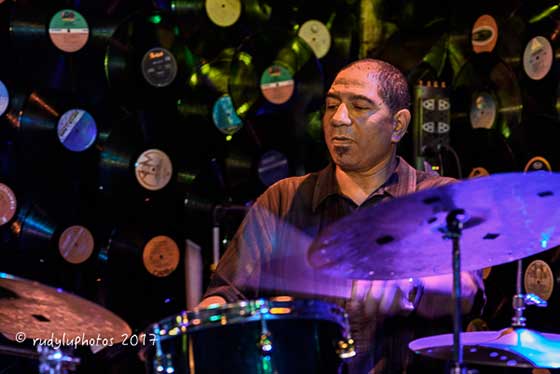 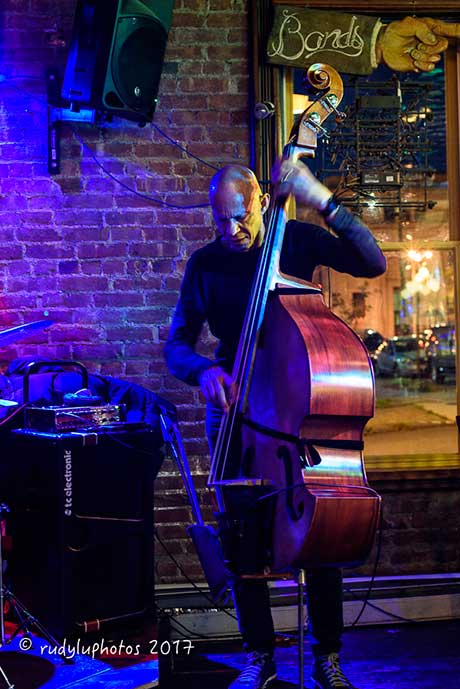 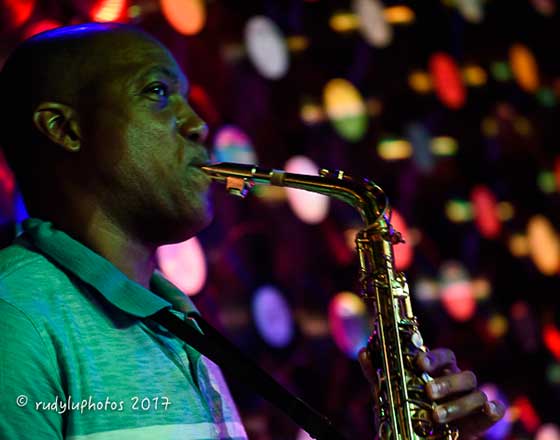 Annie In The Water / Eminence Ensemble

LIVE: River of Dreams, A Tribute to Billy Joel @ Cohoes…