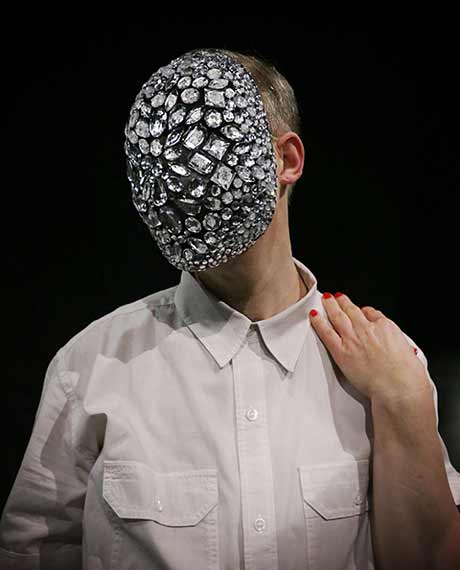 On Thursday (September 28), the Berlin-based artistic duo Pauline Boudry & Renate Lorenz will screen their new film “Telepathic Improvisation” at EMPAC at RPI in Troy. The event begins at 7pm and will include a conversation with Victoria Brooks, EMPAC’s curator of time-based visual arts.

Shot in the EMPAC Theater during Spring 2017, “Telepathic Improvisation” takes as its starting point the late Rensselaer professor and famed composer Pauline Oliveros’ 1974 score of the same name. Scored as prose rather than musical notation, the original Oliveros work calls for the audience to telepathically communicate with the performers, creating “heightened states of awareness” based on an expanded space of communication. Indeed, “telepathy” in this sense, means simply “feeling at a distance.” Boudry / Lorenz take this idea further, asking the film’s audience to also communicate with the other, non-human, elements onstage, from the theatrical lights to a group of autonomous white boxes that glide across the stage.

The film is bookended by a 1969 text by German revolutionary Ulrike Meinhof that prescribes resistance in the face of global capitalist oppression. In this vein, “Telepathic Improvisation” attempts to disrupt historical narratives surrounding agency and action by elevating the technical, non-human actors to the equal status of their human counterparts and communicate new worlds collectively.

The Healing Power of Music [Get Visual]