Anyone who’s attended the Lake George Arts Project’s Jazz at the Lake festival more than once knows what kind of wardrobe to pack: Shorts and short sleeves for the afternoon, with some fleece on hand when the pre-Fall chill creeps in during the Saturday night set. Well, we all could have kept the cold-weather gear at home this year, because summer heat pounded Lake George’s Shepard Park like a sledgehammer on both Saturday and Sunday, causing many attendees to flee to whatever shade they could find. Despite this, the bucolic green space was still filled on both days for JATL impresario Paul Pines’ most adventuresome bill to date.

Cynthia Hilts first appeared on my radar this past January, when I heard her dynamic Blonde Coyote release Lyric Fury during a “Jukebox Jury” panel at the JazzConnect conference in NYC. When the JATL program called Hilts’ brand of jazz “Mingus Meets Debussy,” that wasn’t hype: There is a wonderfully ornate quality to everything the Tuscon-born pianist-vocalist does, whether it’s a rampant brawler like “Blues for the Bronchs” or the glorious, chanted plea “Peace Now.” And while cellist Leigh Stuart added to the classical side of Hilts’ compositional make-up, her borderline-chaotic arrangements allowed Hilts’ septet to sound like the rage-filled army Mingus seemed to conjure up on almost everything he ever recorded.

It’s rare nowadays to get all the musicians from a recording to appear in concert, too, but the entire cast of Lyric Fury was on hand at Lake George, with spectacular results. Australian native Lisa Parrott’s big, bad baritone sax was the heavy lifter on “Those Basinites,” though she also rocked the soprano on the lovely ballad “Teacher” and the complex “Dulcinea’s Plea,” a new composition that cleverly sub-referenced the deluded love song from Man of La Mancha. Lyric Fury co-producer Lily White controlled all the tones in between on alto and tenor sax, blowing up real good on “Bronchs” and the wild encore “Jam & Toast.”

Stuart may have performed JATL’s first-ever cello solo on “Grapefruit and Musk,” while Ratso Harris’ rampaging bass firmed up the Mingus side of the equation. Hilts kept her percussive piano work on the support side for most of the show, though she let herself stretch out beautifully on “Teacher”; the growling new anthem “Persist” showed Hilts has even more music to thrill us with. This was a big, rich meal to start the afternoon, but the crowd happily gobbled it up and asked for more and more.

British-born Nigerian singer Ola Onabule has been a European phenomenon for some time, but as usual in America, we haven’t gotten a sniff because he didn’t start his career here and none of his music is featured in any insurance commercials. From the videos I saw on YouTube, it seemed like Onabule would be a fine choice to continue the “jazz with soul” tradition Charenee Wade started last year at JATL with her bewitching tribute to Gil Scott-Heron. But while Wade’s vocal attack is firmly in the jazz camp, Onabule’s approach as a singer and a performer is closer in concert to a hybrid of Jeffrey Osborne and Seal, and that’s a dangerous mix at a jazz-centric festival like Lake George.

Even so, there was no way you could deny what a force Onabule is. We’re talking about a singer with three octaves and a stage presence that demands you keep your eyes on him with every move he makes. When the steamboat Minnie-Ha-Ha blew its horn during Onabule’s drum-tight scat solo on “How,” Onabule cracked, “Bet he can’t do this,” and switched the scat up to a falsetto that was stronger than rent. Onabule also writes great, relatable lyrics, including the 30-years-on love song “Love Again,” the mournful ode to all the losses of terrorism “The Desperate Ones,” and the skanking reggae call for responsible masculinity “Be a Man.”

While there is a pop aspect to all of Onabule’s songs, there’s also the driving force of AfroBeat and the ghost of Fela Kuti that comes with it; percussionist Victor V. See Yuan kept that factor alive and kicking when he wasn’t embroidering Onabule’s music with bells and shells. All the players Onabule brought with him – most notably pianist Darwin Noriega and drummer PJ Scraggins – have jazz deep in their base, and that brought an edge and a vibrancy to the music that standard pop music sorely lacks. Of all the dice rolls Paul Pines has thrown, Onabule might have been the riskiest – but, as usual, the cubes came up seven.

The Cookers are anything but a roll of the dice. “The Not-Over-The-Hill-Yet Gang” has been the toughest T. Rex in the jungle for most of this decade, and to see all these Hall of Famers play – for free – at a “mini-festival” like JATL is an opportunity that comes along pretty much never. Although I hate to say it, the specter of age did loom over the stage as the band set up. It was literally painful to watch George Cables pull his piano bench slowly over to his instrument with what looked like his one good hand (A metal cane was precariously balanced in his other hand), and there was a real question whether octogenarian bassist Cecil McBee would be able to lift his axe onto the stage. Once the red light went on though, and the band tucked into the epic title track from their 2016 Smoke Sessions release The Call of the Wild and Peaceful Heart, all infirmities went quickly away and the band got down to the serious business of blowing our heads clean off.

It sounds terrible to say, “The Cookers only played a five-song set,” until you factor in that each tune went 15 minutes or better; their “short” encore “Time and Time Again” ran about 10 minutes. Billy Harper’s snarling tenor solos on “Call” and “Croquet Ballet” seemed to go on forever, and I mean that in a VERY good way! Trumpeter Eddie Henderson stood at the mic like a sailor leaning into Hurricane Irma as he blasted away on Cables’ composition “Blackfoot”; Henderson’s got a couple of decades on fellow trumpeter David Weiss, but the Cookers’ mastermind simply pointed his horn down at his mic and matched Henderson volt for volt.

Weiss’ fellow “youngster” Donald Harrison Jr. crushed it every time put his alto sax to his lips, though he never won the crowd’s hearts like he did before the show, when he played “Twinkle, Twinkle, Little Star” to a stunningly cute toddler standing in front of the stage. Cables showed no signs of any health issues as he swung like Aaron Judge all set long, and McBee’s booming in-the-clear opening to Freddie Hubbard’s “The Core” was a textbook demonstration of how to set a sumptuous table. Of all the beasts in this band, though, the biggest beast is drummer Billy Hart, whose titanic solo on “The Core” proved once again that some things get meaner as they get older.

And on that same subject, reed wizard Dave Liebman brought his Big Band back to Lake George for the evening set, but this time he had a larger mission than to simply pummel us all into submission. (He did that, too, but that’s beside the point.) Using charts created by the one true John Coltrane, Lieb was here to show just how deeply his life and musical psyche was affected at age 15 when he saw Trane play at the Village Vanguard. As anyone who’s heard Africa/Brass knows, Coltrane’s music is no stranger to the big-band format, so it was both interesting and galvanizing to watch Liebman put tracks like “Liberia” – Coltrane’s script-flip of “A Night in Tunisia” – and the spiritual tone poem “Angels in Seraphic Light” through a 17-piece filter. It was also noteworthy to see Lieb favor the tenor sax early on over the soprano sax, the axe normally associated with Trane. That actually made me question which instrument I prefer seeing Liebman play: He’s still arguably the best soprano player on the planet, but the horsepower his tenor brought to “Liberia” and the achingly beautiful “Naima” (“Actually my favorite tune of all time,” Liebman admitted to us) could not be denied.

This show did have its problems. As well-arranged and well-performed as they may have been, “My Favorite Things” and “Take the Coltrane” simply did not translate to this format: The former tune was a too-fast take that ditched the soaring expansion of the original recording, while the latter was simply used to allow the other players in the band to wave their individual flags; contrarywise, it was more experimental pieces like “Angels,” “Equinox” and “Peace on Earth” that shined the brightest with this big unit. Also, I wasn’t the only one who commented on the fact that the music of one of the greatest African-American musicians in history was being covered by a band that was entirely Caucasian and mostly within shouting distance of retirement age.

All that said, both pianist Jim Ridl’s gorgeous solo on “Naima” and Vic Juris’ marvelously asymmetrical guitar on “My Favorite Things” must be acknowledged, and the love Liebman holds for Trane and his music was palpable as he worked to blow our minds on every single number. The Dave Liebman Big Band sent us all reeling into the night, for once not needing a sweater or a Hoodie to drive the chill away as we began mental preparations for another day in the beating sun. 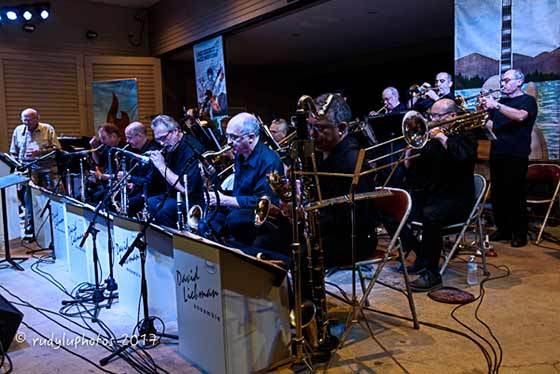