Review and photographs by Rudy Lu
(NOTE: At the request of Mr. Berger and Maverick Concerts, the photos were taken during rehearsal, not the performance)

Ornette Coleman was a major pioneer of what is now known as free jazz, which broke the music away from the Great American songbook. One of Coleman’s major disciples was Don Cherry. He brought African and Asian folk elements to jazz. In many ways, that music is a forbear to what now is known as world music today.

A concert tribute to Cherry was performed by an octet lead by good friends and colleagues of both of them, Karl Berger and his wife Ingrid Sertso at the Maverick Concert Hall near Woodstock. They are also co-founders of the renowned Creative Music Studio, a musical workshop that has been in existence since 1971.

At the Maverick, Cherry’s compositions were arranged in two suites. Many of the compositions originally had no lyrics but but were performed at Maverick Concerts with lyrics written by Sertso herself.

The playing in both suites was soulful and highly emotional, ranging from sadness and somberness to playfulness and euphoria with wide dynamics of sound. The spirit of interplay and cooperation was a huge part of the sound, as this is also a huge part of the workshop experience.

Berger played both vibraphone and piano, both varying from a light touch to a solid swinging. At one point, Sertso engaged in a vocal duet with tuba player Bob Stewart. She sang both lyrics and scatted. Drummer Tani Tabbal drove the swinging rhythm in addition to color, depending upon on the piece. Bass player Adam Lane was a master of walking the bass with a feeling of joy. Graham Haynes provided texture and context with his cornet (often muted). Steve Bernstein played a collection of trumpets ranging from the standard valve trumpet to the slide trumpet. Peter Apfelbaum served up an especially array of expressive solos.

Along with traditional bebop and straight ahead jazz, both suites exhibited heavy African influences with the first featuring a composition honoring Zimbabwean musician Thomas Mapfumo, the second “Africa” composed while on tour in Senegal. Meanwhile, “Perfect Love” from the first set had strong Tibetan Buddhist influences. 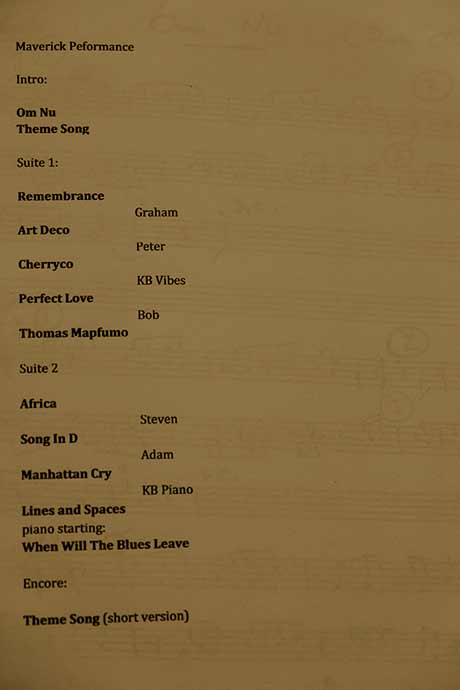