Okay, the awards are handed out, and the servers have cleared away the plates. LET’S COUNT ‘EM DOWN! 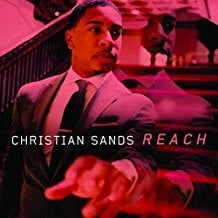 CHRISTIAN SANDS: Reach (Mack Avenue)
After manning the piano chair for über-bassist Christian McBride’s various acoustic projects, Sands jumps out of the nest with Reach and flies like a big freaking bird. Whether it’s on dazzling originals like “Gangstalude” and “Song of the Rainbow People” or a devilish reboot of Bill Withers’ “Use Me,” this New Haven native displays a dynamic playing style and a dazzling melodic sense. Although he rocks the piano-trio format with drummer Marcus Baylor and bassist Yasushi Nakamura, Reach shows Sands is capable of so very much more, and the future is so bright, we’ll ALL need shades. TOM GUARNA: The Wishing Stones (Destiny Records)
You know a disc is really great when other musicians rave about it. That’s the case with The Wishing Stones, Guarna’s seventh release as a leader and first for Destiny. The spiritual tone set by the opener “Prelude” tells you this is not going to be just another hollow-body guitar date, and that promise is fulfilled throughout this set of 11 scintillating originals. The brightness that shines from high-flying tracks like “Native Tongue,” “Unravel” and “Song for Carabello” reminds you of the elegant sounds the Pat Metheny Group made during their ECM days. Make no mistake, though: Tom Guarna’s no wannabe. He’s got his own ideas, and you’ll want to hear every one of them. LINDA MAY HAN OH: Walk Against Wind (Biophilia)
The growth curve of this Malaysian-born, Australian-bred bass wunderkind has been pure pleasure to watch, and things just got even more interesting with Walk Against Wind, Oh’s first release on pianist/partner Fabian Almazan’s trailblazing label Biophilia. Never one to play it safe, Oh’s collection of complex originals shows she’s still not afraid to stretch boundaries or challenge her audience’s intelligence. Her collaboration with tenor monster Ben Wendel continues to produce gold from thin air, while Matthew Stevens’ muscular guitar adds a gritty snarl to solos and foundations. The story continues for Linda May Han Oh, and it’s still decidedly exhilarating. DAVID WEISS & POINT OF DEPARTURE: Wake Up Call (Ropeadope)
Weiss’ hard-bopping work with the Cookers gets lots of love (and rightly so), but Point of Departure is a project of Weiss’ that needs to get a lot more love, because Wake Up Call is their most explosive release to date. POD lets Weiss mix electric and acoustic elements to create a 21st-century fusion sound that takes no prisoners and throws tradition right under the bus. The towering opening take on John McLaughlin’s “Sanctuary” definitely leaves a mark, as does POD’s dynamic reboots of two Tony Williams classics, “Pee Wee” and “The Mystic Knights of the Sea.” Like Weiss, Wake Up Call is the 800-pound gorilla that does what it damn well wants, and does it absolutely splendidly. JOSH NELSON: The Sky Remains (Origin)
You don’t think of Los Angeles as a place that evokes symphonic delight, but that’s what Nelson has created with this sprawling song cycle inspired by the past, present and future of his hometown. Nelson takes you through the bridges and tunnels (both physical and spiritual) that helped connect L.A.’s multifaceted communities, showing you snapshots of the people, places and things that contributed to the City of Angels’ legendary saga. The detail work is incredible, whether Nelson’s touring an abandoned seaside amusement park or walking you up the stairways that led to Los Angeles’ myriad hillside communities. You don’t have to love L.A. to love The Sky Remains, but you just might love it when it’s all over. NICHOLAS PAYTON: Afro-Caribbean Mixtape (Paytone Records)
For Payton, jazz has always been a four-letter word – not in terms of the music itself, but in terms of how the word is used to keep this music, and African-American musicians in particular, in one single cultural place. Afro-Caribbean Mixtape is the New Orleans trumpet master’s attempt to show the African cultural diaspora that was born with the blues in the Mississippi Delta continues to grow and thrive, even as it continues to be undermined from within and without. Payton weaves a tremendous tapestry of blues and hip-hop (and, yes, jazz) mixed with the spellbinding words of Dr. Greg Kimathi Carr, Dr. Charshee Mcintyre and jazz icons like Max Roach, Duke Ellington, and Dizzy Gillespie. Nicholas Payton has painted his masterpiece, and everyone needs to take a good, long look. CHARLES LLOYD NEW QUARTET: Passin’ Thru (Blue Note)
I’m still not completely sure why Lloyd called this band the “New Quartet,” particularly when Jason Moran, Reuben Rogers and Eric Harland backed the soon-to-be-octogenarian multi-instrumentalist on some of his best work with ECM. Maybe it’s a contractual thing or something – or maybe it’s the death-defying new music this unit creates on Lloyd’s third release (and second live date) for Blue Note. The seventeen-minutes-plus epic “Dream Weaver” would be the anchor for most discs, but for Passin’ Thru, it’s just opening the door to a night of stellar musical exploration at the Montreux Jazz Festival in 2016. Some things get meaner as they get older, and Charles Lloyd is still as mean as it gets. MATT WILSON: Honey and Salt: Music Inspired by the Poetry of Carl Sandburg (Palmetto)
I’ll admit I rolled my eyes when I saw the title of Wilson’s latest work: The drummer’s recent projects have been hit or miss at best, and it looked like the trend would continue. Then I heard the buzzsaw blues of the opener “Soup,” and I just shut up and listened. Wilson’s connection to the iconic poet isn’t just familial (Sandburg’s cousin was married to Wilson’s great great aunt Emma); it’s visceral, as Wilson creates a set of sharp, focused pieces that act as perfect platforms for Sandburg’s words – some of them beautifully sung by guitarist Dawn Thomson, others read by everyone from Christian McBride and Joe Lovano to Jack Black and the poet himself. High-school English teachers put almost all of us off poetry as a concept; Honey and Salt has the mesmerizing power to bring us all back. VIJAY IYER SEXTET: Far from Over (ECM)
Up until now, piano-trio dates have been Iyer’s thing – both with ECM and with fellow German label ACT. On Far from Over, Iyer opens the color palate up wide, pairing longtime bassist Stephan Crump with young lion drummer Tyshawn Sorey and bringing in a killer front line of horn master Graham Haynes and reed wizards Steve Lehman and Mark Shim. The opening “Poles” starts with Iyer all alone in the spotlight, but by the song’s midsection the band is throwing down like their lives depend on it. Things get ethereal and expansive on “Threnody” and “End of the Tunnel,” but they also get grooving on “Nope” and “Into Action.” Sometimes less is more, but on Far from Over, more lets Iyer be more of the monster he can be. JACK DEJOHNETTE, LARRY GRENADIER, JOHN MEDESKI & JOHN SCOFIELD: Hudson (Motema)
At the end of the less-than-artfully-named Woodstock Jazz Festival at Bearsville Theater in 2014, those in attendance were knocked into a state of absolute bliss by this atomic-powered quartet. After we scraped ourselves off the floor, we all decided, “Well, that’ll never happen again!” Thank goodness we were all wrong, because Hudson takes the blinding flashes we saw at Bearsville and turns them into dazzling portraits of color and depth. Although the group works out on rock classics like “Woodstock” and “Up On Cripple Creek,” originals like “El Swing,” “Song for World Forgiveness” and the title track show these guys didn’t just phone in a session for the jam-band crowd. Hudson is one for the ages, not for just one night.

That’s my take. It’s a free country (at the moment, anyway), so your results may vary. Ask your doctor if this music is right for you… and if he says “no,” fire that philistine twit, because he’s been listening to the Muzak in the waiting room for too damn long!

Sounds o’ the Season: Holidelic’s “Twas the Night Before the Funk”