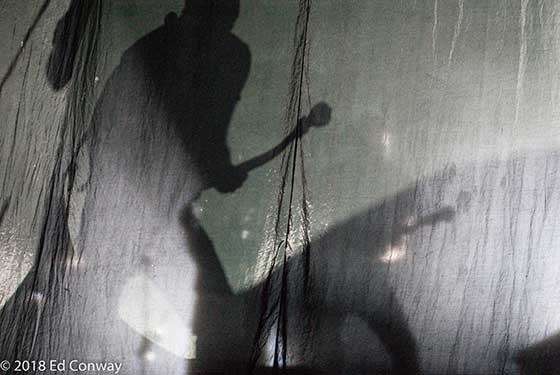 Review and photographs by Ed Conway

A rookie gets called up to the majors, and as he’s walking to the batter’s box, the bases are loaded in game seven of the World Series. He’s just hoping to get a hit. Instead, he hits a grand slam home run and wins the game. Where can he go from here? He’s already done the best thing he can do, and it will be impossible to top this. That’s exactly what happened on a Sunday night at a brand new Greater Nippertown music venue. The Albany Capital Center, a convention center complex that’s just celebrated its first anniversary, hosted their very first concert, and it was a sell-out of 4,000 fans for Boston’s Irish/punk band Dropkick Murphys. One thing that may have helped sales was the fact that it was an all-East Coast line-up as Boston ska veterans Bim Skala Bim and New York City’s seminal hardcore heroes Agnostic Front opened the show.

The evening started differently as most of the crowd arrived well before the opening act, Bim Skala Bim took the stage. While it may be understandable for a general admission audience to get good spots by the rail, the crowd already stretched toward the back. Bim didn’t disappoint, either. Their set got the audience rocking from the beginning. It’s hard not to get excited as the off-beat tempo provided by drummer Jim Arhelger and the signature sound of a strong horn section – featuring trombonist Vince Nobile and saxman Dave Butts – keep everyone dancing.

Agnostic Front blasted onto the stage for 40 minutes of in-your-face hardcore rock. Lead singer Roger Miret and guitarists Vinny Stigma and Craig Silverman were in constant motion throughout the set. As is the job of the second slot of a three-band show, the Front took what was already a hopping audience and pushed further up the dial as the crowd-surfing began (the first one of which managed to whack me in the face, I guess I didn’t duck quickly enough). Oddly enough both bands finished their sets with cover songs – Bim played an interesting and enjoyable ska version of Pink Floyd’s “Brain Damage” and the Front played the Ramones’ “Blitzkrieg Bop.”

As strains of Sinead O’Connor’s “The Foggy Dew” wafted through the sound system, the house lights came down, and the lights on the back of the stage came up to reveal silhouettes of the Dropkick Murphys on a mid-stage curtain, which soon fell away, as the band blasted out “The State of Massachusetts.” The Murphys flew from song to song in their 25-song set without much pause, only talking to the audience a few times to announce a few special songs (such as “Rose Tatoo”) and to mention the first songs that lead singer Al Barr sang with the band (“Curse of a Fallen Soul” and “Caught in a Jar”). If the Front moved around the stage in their set, the Murphys made even more use of their expanded stage as singer Barr must have put in 10 miles running around the stage. Bassist Ken Casey shared the lead vocal duties, as all seven members lent their voices to the proceedings. Tim Brennan and Jeff DaRosa should have their photos in the dictionary under “multi-intrumentalist” as they switched between accordion, mandolin, guitar, keyboards and banjo as well as backing vocals. Drummer Matt Kelly kept the beat hot and heavy throughout the night, even leading a crowd chant of “Let’s go Murphys” as the stage crew fixed a little problem with Brennan’s set-up. Rounding out the band was James Lynch on guitar and piper Lee Forshner. Watching this band throughout the evening, I was amazed that they lasted for the full set, let alone for more than 20 years, as they pushed their voices to eleven.

While it may have seemed odd to have a ska band and a hardcore band warm up, after listening to the Murphys, it makes perfect sense as the Murphys sound is not so easy to peg. It doesn’t hurt that these bands have shared the stage together before. There aren’t too many punk bands that use traditional Irish/folk instruments, such as bouzouki, banjo, mandolin, tin whistle, accordion and bagpipes, but it works extremely well. The energy put out by all the bands easily moved to the audience and vice versa.

If the Capital Center can keep that energy going for future shows, they have a winner. The space is cavernous, but it was filled with the heavy sounds of bands and audience having a great time.

DROPKICK MURPHYS SET LIST
The State of Massachusetts
The Hardest Mile
The Boys Are Back
I Had a Hat
Rebels with a Cause
Going Out in Style
Blood
Buried Alive
Time to Go
First Class Loser
Gonna Be a Blackout Tonight
The Gang’s All Here
Rose Tattoo
Heroes From Our Past
The Outcast
Sunday Hardcore Matinee
Prisoner’s Song
Paying My Way
Captain Kelly’s Kitchen
Curse of a Fallen Soul
Caught in a Jar
Johnny, I Hardly Knew Ya
Out of Our Heads
ENCORES
I’m Shipping Up to Boston
Until the Next Time