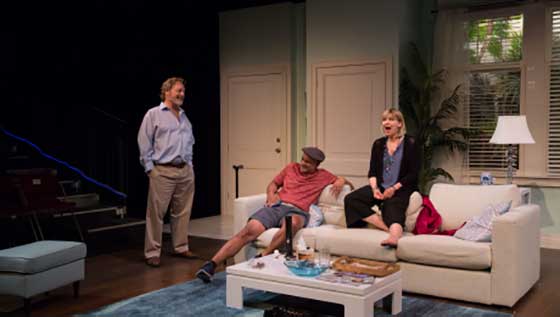 For its first production of the 2018 season, Shakespeare & Company in Lenox dispenses with kings, queens and wars, instead seeking a perfect marriage between the characters depicted onstage and the viewing audience. Although, alas, no perfect marriage exists for the three mature characters in Carey Crim’s Morning After Grace, the seniors among the spectators are rewarded as they recognize themselves in almost every line.

This is the New England premiere of Morning After Grace, first produced by the Purple Rose Theatre Company in 2016 in Michigan and earlier this year by the Asolo Rep in Sarasota. The play can be classified as a comedy, but one with serious emotional underpinnings about love, loss and new beginnings.

Angus (Steven Barkhimer), Abigail (Corinna May) and Ollie (Kevin Vavasseur), all residents in a Florida retirement community, gather together for the first time in Angus’ apartment the day after a funeral. During the course of the play they affect one another, often in unpredictable ways.